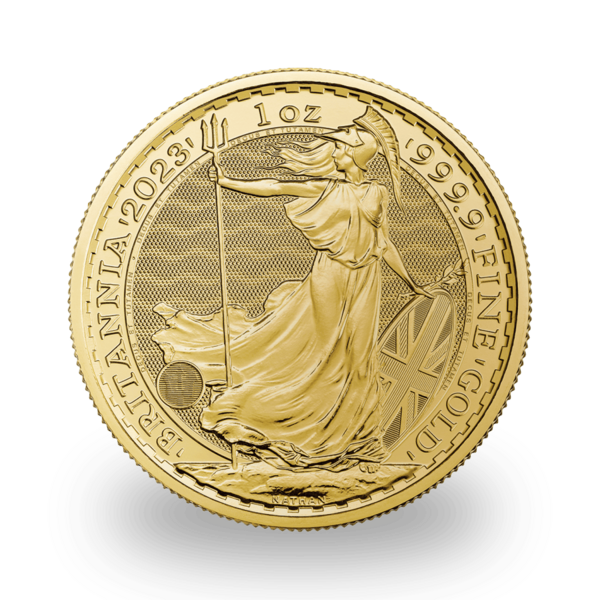 The Royal Mint is famous for its ability to blend the finest craftsmanship with innovative technology, and the Britannia 2023 bullion coin features security technology that make it the most visually secure coin in the world.

Britannia is the female representation of Britain and has been the modern face of bullion since 1987. The iconic design has evolved over time. Struck in 999.9 fine gold and enhanced with four new features, Philip Nathan’s depiction of Britannia is as beautiful as ever on this bullion coin.

Brittania is boldly standing beside a shield that bears the Union Flag, a symbol of Britain’s strength. She bears a trident in her right hand, while the left hand holds an olive branch representing peace. ‘BRITANNIA 2023, 1 OZ’, and ‘999.9 FINE GOLD’ are inscribed along the rim.

For almost 70 years, Her Majesty Queen Elizabeth II has appeared on the obverse of UK coins. On 8 September 2022, Her Majesty passed away peacefully. Following the death of his mother, His Majesty The King acceded to the throne, signaling the beginning of a new era for the UK and its coinage. Marking the historic succession from one monarch to another, the Britannia 2023 coins are the first to feature King Charles III’s official coinage portrait designed by acclaimed sculptor Martin Jennings.

In keeping with a tradition dating back centuries, where each monarch faces the alternate direction to their predecessor, the portrait of King Charles III faces left, whereas Queen Elizabeth II’s definitive coinage portraits show Her Majesty facing right. The obverse also contains inscriptions that read ‘2 POUNDS’ (legal tender in the UK), ‘CHARLES III’, and ‘D.G. REX. F.D.’ (‘Dei Gratia Rex Fidei Defensor’ — Latin for 'By the grace of God, King, Defender of the Faith').

Recognised and trusted around the world, the Britannia coin is sought after by investors and institutions alike. Invest in a timeless icon.