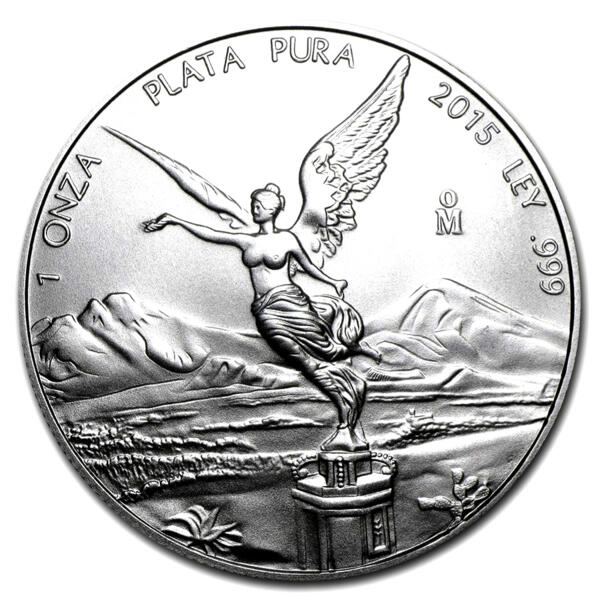 The winged Angel of Independence, which stands in downtown Mexico City as a symbol of this country’s 1920 struggle for modern statehood, is beautifully depicted on the observe of the Silver Libertad (Liberty) coin. She is flanked on each side by the twin volcanoes Popocatepetl and Iztaccihuatl, representing the legendary doomed lovers of the nation’s folklore. The top shows the coin’s weight, purity and metal content also appear here while, on the reverse, you find the golden eagle holding a serpent in its beak and talon, as well as Mexico’s various coats of arms through its storied history.

Mexico’s Silver Libertad, since its first appearance in 1982, has become one of the world’s most favorite bullion coins, due to its limited mintage, not to mention sheer beauty. They have superb collectible value over the long term, in addition to their straightforward worth of holding wealth in physical silver.
Add to this its origin in Banco de Mexico’s Casa de Moneda, the oldest mint in North America (dating back to 1535), and you have a classic investment in your portfolio, each coin containing one ounce of brilliant, finely crafted silver.
The Silver Libertad has no face value but it is legal tender in Mexico, based on the current spot price of the precious metal. Its reeded edge provides extra security and the matte finish excellent durability.

The Silver Libertads have not changed over the years, so the design on the 2015 is the same as the ones from previous years. The mintage does change though, and as that’s one of the main reasons investors opt for this coin, it’s worth paying attention to. In 2015, just over 900,000 of these coins were minted.