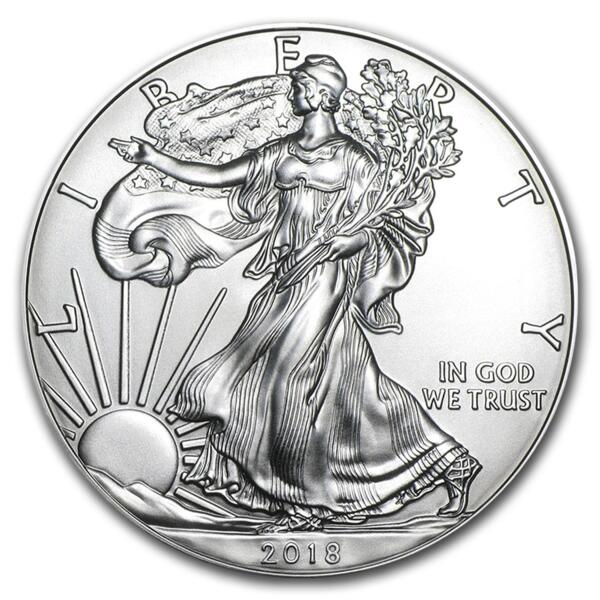 The official silver bullion coin of the USA, the American Silver Eagle harkens back to the Old West (or at least old westerns!) when a silver dollar was part of the landscape that included stage coaches, six-guns, and outlaws. As you will find out (or be reminded), its recent history shows why such an action-related reference is apt, at least to some degree. Here in the new millennium, sales of the Silver Eagle unexpectedly outpaced even the most optimistic forecasts. When the global recession hit in 2008, investor demand surged for bullion coins as a hedge against inflation and, from February to March, sales increased nine-fold — from 200,000 to 1.85 million! Such periods of buyer frenzy occurred again in the first week of 2013 and once more in the first six months of 2015. Subsequently, very strong demand for the Silver American Eagle has emerged from Asian markets such as China, Singapore, and Hong Kong. Avoid disappointment, and place your order today with Goldbroker.com.

Although the Silver Eagle was released for the first time by the United States Mint on November 24, 1986, its Walking Liberty design (like the one appearing on the Gold American Eagle) first came to life in the early 20th Century. It was created by German-born American sculptor Adolph A. Weinman in 1916 for the 50-cent piece that was in circulation until 1947. Lady Liberty strides east toward the sunrise, gown and cape billowing in the wind, one arm cradling a large bough of branches and the other stretched forward in a gesture of hope and progress. The words LIBERTY and IN GOD WE TRUST speak volumes. Revived for this coin due to its lasting popularity, it was backed by John Mercanti’s heraldic eagle with shield, sash reading E PLURIBUS UNUM (One Out of Many) in its beak, olive branch and arrows in talons, and topped by 13 five-pointed stars. This reverse side is circled by the words UNITED STATES OF AMERICA, 1 OZ. FINE SILVER ~ ONE DOLLAR.

The American Silver Eagle, with all its beauty and excitement, is a shining symbol of freedom, patriotism, and the American spirit.