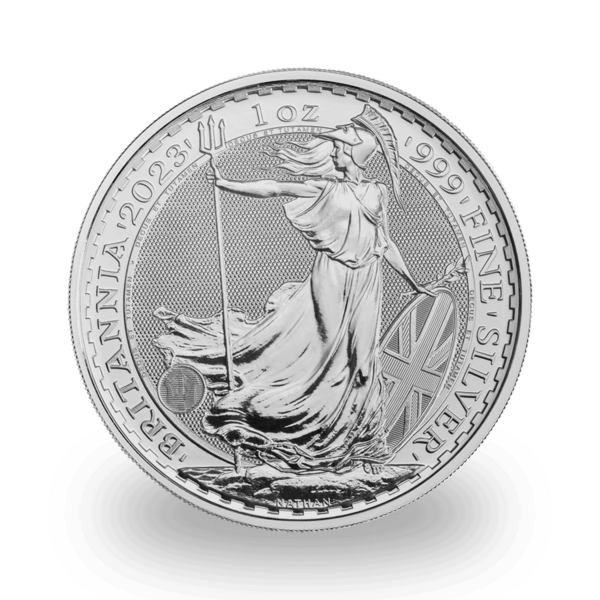 The reverse features the legendary figure of Britannia by Philip Nathan. Boldly standing in the eye of the storm, she displays an unyielding resolve. She bears a trident in her right hand, while the left hand holds an olive branch representing peace. The design is surrounded by the words ‘BRITANNIA 2023’, ‘1 OZ’, and ‘999 FINE SILVER’.

Below Britannia’s flowing gown, is a trident to represent her naval history. As the viewer changes their perspective this trident becomes a padlock, emphasising the coin’s secure nature. The inscription ‘DECUS ET TUTAMEN’ (‘An ornament and a safeguard’) borders the design. Surface animation behind Britannia reflects the movement of the sea, and fine details such as the Union flag on Britannia’s shield - symbol of Britain’s strength - have been carefully highlighted with tincture lines.

The obverse features the first coinage portrait of His Majesty King Charles III, masterfully engraved by Martin Jennings. In keeping with a tradition dating back centuries, where each monarch faces the alternate direction to their predecessor, the portrait of King Charles III faces left, whereas Queen Elizabeth II’s definitive coinage portraits show Her Majesty facing right. This portrait is surrounded by the inscriptions ‘2 POUNDS’ (legal tender in the UK), ‘CHARLES III’, and ‘D.G. REX. F.D.’ (‘Dei Gratia Rex Fidei Defensor’ — Latin for 'By the grace of God, King, Defender of the Faith').

The 2023 Britannia 1 oz Silver Bullion Coin contains one troy ounce of 999 fine silver - the purest of silver offered by The Royal Mint.