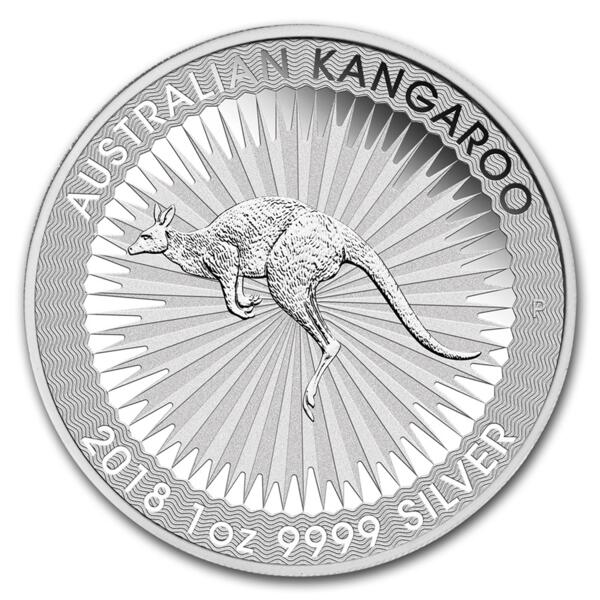 Perth Mint entered the silver bullion coin market with a bang in 2016, staking its ground in an investment world dominated by America, Canada, and Austria. The 1 oz. Australian Silver Kangaroo sold over 11,000,000 units that year. This tremendous success could be attributed to it as a first official release, but demand did not flag in 2017 so similar enthusiasm is anticipated for this year. Goldbroker.com recommends you place your order promptly, as distribution to foreign markets is limited. With its highest possible purity of .9999 and attractive value retention and liquidity potential, the 1 oz. Australian Kangaroo silver bullion coin deserves serious investment consideration.

The reverse of the coin displays an adult kangaroo in motion from left to right against a starburst background. The third A in AUSTRALIAN KANGAROO over top of the image contains an authentication feature that can be detected with a magnifying glass. The inscription below reads 2018 1 oz 9999 SILVER. The obverse shows British sculptor Ian Rank-Broadley’s effigy of the nation’s titular monarch (his initials below it) circled by ELIZABETH II, AUSTRALIA, AND 1 DOLLAR on a textured background.

The coin’s dimensions, 2.98 mm. thick and 40.6 mm. in diameter, match that of the American Silver Eagle, while it’s noticeably wider but thinner than the Silver Britannia, the Canadian Silver Maple and Austrian Silver Philharmonic.