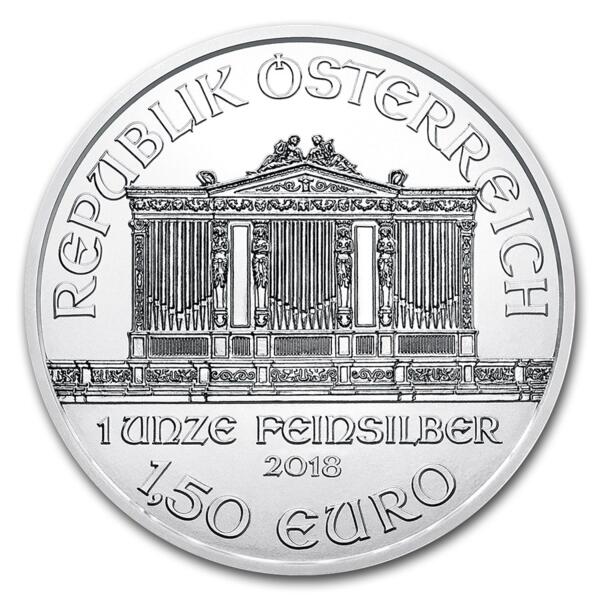 The Austrian Mint’s Silver Philharmonic bullion coin marks its tenth anniversary in 2018 and enjoys considerable prestige in the eyes and hands of collectors and investors around the world, despite its relatively young history. This is due to the respect owed to its maker, designer, and gold counterpart, but also to its ancestor. That would be the Maria Theresa thaler (MTT), one of the most famous coins in the world since its first minting in 1741. Named for the conquering empress and bearing her image, the ¾ troy ounce silver coin lost legal tender status in Austria in 1858, although India and several African and Arab countries continued to use it until the Second World War. It is still produced and remains a favorite with collectors. Since the year of the Empress’s death, the MTT always bears the date 1780, and its denomination, the thaler, was used throughout Europe for nearly 400 years. The word is the origin of what we call the dollar. So, the Maria Theresa is “big sister” to the full troy-ounce Silver Philharmonic, which earned its own recognition by being named Most Popular Coin at the 2012 Coin of the Year Awards. Moreover, it is prized by investors for its 31.1 grams of fine silver and 99.9% purity.

The Silver Philharmonic is identical to its Gold Philharmonic counterpart in design, with two major differences: (1) It’s more than 50% thicker, at 3.2 mm. and (2) Its edge is smooth, not reeded. Otherwise, the award-winning design by Austrian Mint engraver Thomas Pesendorfer is the same. The coin features the venerable Vienna Musikverein pipe organ on the obverse, around which are placed the words REPUBLIK ÖSTERREICH, 1 UNZE FEINSILBER, 2018, and 1,50 EURO. (It’s the only silver bullion coin in existence with its face value in euros.) The reverse shows WIENER PHILHARMONIKER and SILBER over the design of musical instruments: a cello, a Vienna horn, a bassoon, a harp, and four violins. A harmonious and proven addition to your precious metals investment portfolio.