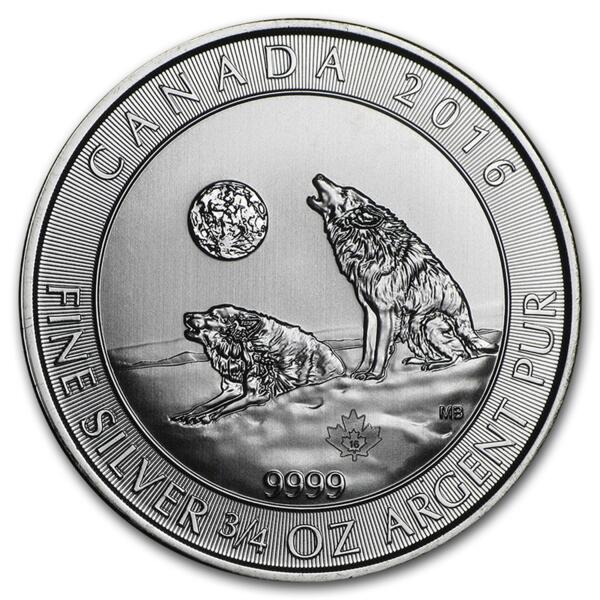 The Royal Canadian Mint have done it again, producing an exceptional coin that is minted in the finest silver and depicts the natural world. This time it is the turn of the Silver Howling Wolves coin, which gets its name from the two howling wolves shown on its reverse.

To be classed as “fine silver”, a coin needs to contain a purity of .999, which can also be represented as “99.9%” or simply “999”. This is used in Good Delivery bars and is a very high standard of silver, but the Royal Canadian Mint have gone one better. They have created something known as “Ultra Fine Silver”, which is refined to a purity of .9999 and is used in the Silver Howling Wolves coin.

This is the highest purity of silver on the market, making this beautiful piece an attractive proposition for collectors and investors alike. It is also quite a culturally significant piece, as the grey wolves featured on this coin were close to extinction not too long ago, before their numbers slowly began to rise. Canada played a big part in saving this species, as 3 out of every 10 of these majestic animals live in this country.

The design of this coin includes a depiction of Her Majesty Queen Elizabeth II, created by Susanna Blunt. This design has featured on Canadian coinage since 2003 and shows the queen in her mature years, complete with a wizened smile. This side of the coin also displays a face value of $2, as well as the name of the queen, which is inscribed around the edge.

The reverse is where the Silver Howling Wolves coin gets its name. This shows two wolves, one lying, one sitting. They are both howling at the moon, which is also included in the scene. This is a winter scene, set in the deep forests of Canada, serving as a stark reminder of the majesty and the danger that exists in the remotest parts of this great country.

The reverse side of the coin also features the purity, which can be found below the wolves. The weight of the coin, as well as the country of manufacture and the year it was minted, are also on this side of the coin, included in a border that separates the main design from the inscriptions around the edge.

The Royal Canadian Mint take security very seriously and always have done. Over the years they have pioneered many advancements in mint security, many of which were first used on their popular Maple Leaf bullion coin. Some of those features can also be found on the Silver Howling Wolves coin, including a micro-engraving of a maple leaf and radial lines set on both sides of the coin. These features make the Silver Howling Wolves coin very hard to counterfeit and gives the buyer that much needed peace of mind.