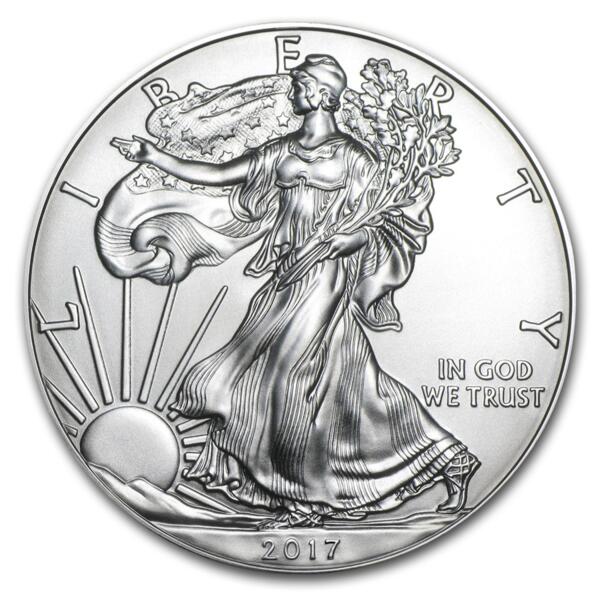 The “Walking Liberty” design on our silver dollar was originally created for the half-dollar coin issued by the national mint in 1916 and in circulation until 1947 when it was replaced by the Benjamin Franklin. The 50-cent piece is the only U.S. coin, along with the penny, that has been produced every year since the Mint started in 1794. The present half-dollar (the largest of all our coins in both size and weight) features President John F. Kennedy on one side and the U.S. Presidential Seal on the other. The Walking Liberty design migrated to the new American Silver Eagle when it was first struck in San Francisco in 1986. It has since become one of the most popular silver coins in the world, sometimes (as in 2015) selling out within days of its release.

Containing 1 troy ounce of .999 fine silver, the American Silver Eagle measures 40.6 mm (1.6 inch) in diameter and is 2.98 mm (.12 of an inch) thick, marginally larger than its golden counterpart. The Walking Liberty design shows her walking toward the rising sun in the east, wearing a flowing dress and stars-and-stripes cloak, one arm holding a bough and the other stretched forward. The word LIBERTY rounds the top half of the coin, 2017 the bottom, and IN GOD WE TRUST is situated to the right. The flip side shows a design by U.S. Mint engraver John Mercanti of a bald eagle with a shield, an olive branch in one talon and arrows in the other, below which are his initials. E PLURIBUS UNUM is draped in a ribbon over its spread wings. An inverted triangle of stars appears above its head and over that, UNITED STATES OF AMERICA, while 1 OZ. FINE SILVER ~ ONE DOLLAR stretches around the bottom. It is to be noted that there is no mintmark, meaning that the coin may have come out of either the San Francisco or West Point facilities.
This is a modern American classic with deep roots in the history of our nation. Goldbroker.com would be honored to deliver this wise investment, must-have collectible, and proud symbol of freedom to your door or storage facility.