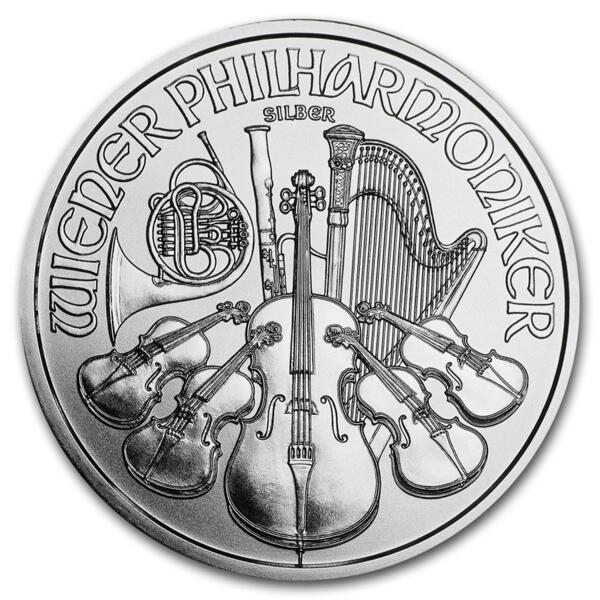 Austrian minting began with silver more than 800 years ago. King Richard I, on his way home to England from the Crusades, was captured and thrown into prison by Duke Leopold in 1194. Richard the Lionheart paid a bounty of 15 tons of silver for his release, which the Duke of Austria struck into coins. Once again, coinage holds an integral place in world history, perhaps nowhere more than it does in Europe. The design of the Philharmonic coin, not to mention its actual name, is tied directly to Austria’s musical heritage, with its wealth of names like Mozart, Haydn, Schubert, and Strauss.

Almost 20 years after introducing its gold bullion coin, the Austrian Mint introduced the Silver Philharmonic in 2008 (a platinum coin was added to the line in 2016). The Vienna Philharmonic is legal tender in Austria and remains the only European bullion coin with its face value in euro.

The powerful Vienna Musikverein pipe organ decorates the obverse of the Silver Philharmonic coin, framed by REPUBLIK ÖSTERREICH above and 1 UNZE FEINSILBER, 2011, and 1,50 EURO. The reverse states WIENER PHILHARMONIKER at the very top and SILBER just below it, topping the design of musical instruments: the cello, four violins, a Vienna horn, a bassoon, and a harp. It has the same 37 mm (1.45 inch) diameter as the gold coin but is thicker at 3.2 mm (.13 of an inch).

Like its gold counterpart, the Silver Vienna Philharmonic is one of the world’s best-selling bullion coins.