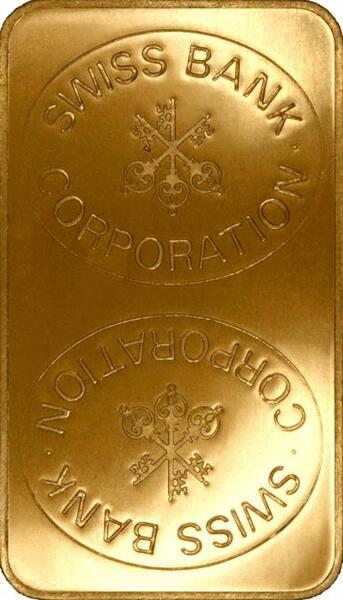 The one kilogram (32.15 troy ounce) gold bar is considered the most popular investment for people (outside Asia) who are serious about saving or protecting themselves against the ongoing economic certainties. As a testament to this popularity, it is estimated that more than one million of them are minted each year, most of them by, or by order of, Swiss institutions.

Most Swiss Bank Corporation gold bars, from 1934 to 1998 (when the bank merged with UBS), were minted by Métaux Précieux SA, now known as Metalor Refining Group, headquartered in Neuchâtel, near Zurich. The Metalor Group focuses its business on refining precious metals, doing so specifically with gold in Hong Kong, China, Singapore and the United States, just south of Boston at North Attleboro, MA. After significant expansions were undertaken in 2011, the facilities account for a total annual worldwide capacity of 650 metric tons of gold, 150 metric tons of which are processed at the Massachusetts plant. Metalor also refines silver, platinum, palladium and rhodium.

This cast bar includes its unique serial number at the very top followed by the company’s iconic logo with three crossed keys (symbolizing confidence, security and discretion) surrounded by the words Swiss Bank Corporation. The three key motif was adopted by the new UBS after the 1998 merger. Below this you will find the weight (1 Kilo) and the assayer’s markings (in French) and the gold’s purity (999.9).

Swiss Bank Corporation traces its history back to 1854 in Basel, Switzerland. Through the 1800s and 1900s, SBC grew steadily through the acquisition of rivals, culminating in its merger with Union Bank of Switzerland to become UBS, one of the largest diversified financial institutions in the world, operating in over 50 countries with some 64,000 employees.