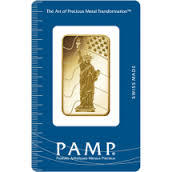 The PAMP Suisse Liberty ingot connects to a big part of American history, depicting the Statue that is synonymous with American freedom and justice, one that has famously greeted countless immigrants who have left distant shores to start a new life in America, and New York City in particular.

The bar combines this iconic statue with PAMP’s tireless attention to detail, creating something that investors of all creeds, classes and nationalities can appreciate.

The Statue of Liberty has a place in the hearts of all Americans and is one of the most iconic statues in the world. Located on Liberty Island in New York City, it was a gift from France to the people of the United States. It was given to them in 1886 and is based on Libertas or “Liberty”, the Roman Goddess of justice. The statue was actually built by the same man who built the Eiffel Tower.

It is this iconic American statue that is depicted on the obverse of the PAMP Suisse Liberty Gold Ingot. She stands tall and proud, with a torch held high in one hand and a tablet of law clutched to her chest in the other. In this particular design Liberty stands before an American flag that is in motion — waving elegantly in the wind — with the stripes all around her and the stars above her.

This 1 ounce bar contains 999.9 fine gold, refined to PAMP’s typical high standards and under their strict quality control procedures. All of these bars are minted to an exact specification which means that every single piece will be the same as the one that came before and the one that went after.

This is one of PAMP’s biggest sellers, particularly in the United States. That’s because the Statue of Liberty symbolizes freedom and prosperity, as well as compassion and opportunity. It is all part of the American Dream, and that touches a nerve with those who were born in the US, those who immigrated to the US and even those who have never visited the country. In looking for something that perfectly summed up the spirit of this great country, PAMP couldn’t have found anything better and more poignant.

On the reverse of this bar you will find a number of details, including the bar’s weight, purity and content. The PAMP Suisse logo, assay stamp and serial number are also on the reverse. This serial number matches the one that you find on the back of the protective packaging, which includes the assayer’s signature, as well as some other assay details.