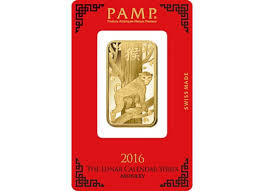 Indulge your mischievous side with the Lunar Monkey gold bar from PAMP Suisse. This 1 ounce bar is part of the Lunar series, which represents the many animals that form the Chinese Zodiac. First minted in 2016, it celebrates the Year of the Monkey, which began on February 8th, 2016, and ends on January 27th, 2017.

The Year of the Monkey is the ninth in the zodiac cycle and if you were born during one of these years then you are said to have positive traits such as dignity, intelligence and confidence, with negative traits such as egotism, selfishness and recklessness. According to Ancient Chinese wisdom, you may also be more susceptible to certain illnesses and you may have a preference and a need for certain foods. It usually depends on which of the five elements are at play, because each year is also tied to one of the elements, with this particular Year of the Monkey being associated with fire. That means that if your baby is born during this calendar year, the Chinese Zodiac predicts he or she will be ambitious and adventurous, but may also be prone to irritation and frustration.

The monkey featured on this 1 ounce ingot is graceful and elegant, having been majestically engraved onto this 999.9 gold bar. It comes encased in CertiPAMP protective packaging, which features a bold red and black color scheme with an oriental design.

There are many unique aspects to this 1 ounce Lunar Monkey bar. PAMP has minted a great number of gold bars over the years, many encased in standard packaging with (typically) only the obverse featuring an intricate engraving. In this case, however, not only does the packaging look a little different but the Lunar Monkey design wraps around the entire bar. On the obverse it shows the monkey sitting atop a tree and looking out, while the reverse shows the same image from the other side, with only his tail and back visible.