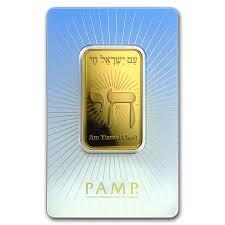 Although it is often considered to be one of the biggest religions in the world, there are only an estimated 14 million followers of Judaism, fewer than the number of people who describe their religion as “Spiritualist”. But when it comes to history, heritage and cultural significance, few religions can rival Judaism.

The words “Am Israel Chai!” are significant to all Jews and roughly translate as “The People of Israel Live!” These are the words on this PAMP Suisse bar. It is a minted gold bar that was created to celebrate this statement and this religion, and it is part of the PAMP Suisse series that celebrates world religions.

The obverse of this 1 ounce gold bar features the words “Am Israel Chai!” written in Hebrew.  These words mean a lot to all Jewish people, making it a perfect gift for a follower of this faith. This is a unique creation and was commissioned as an exclusive to PAMP Suisse.

This bar comes in CertiPAMP protective packaging. Sealed at the mint, these packages help to keep your investment safe, guarding it against the elements to ensure that it remains in perfect condition. The packaging also contains an assay, which verifies the fineness and the weight of the metal, along with an assay signature.

As well as the exclusive design on the obverse, the Am Israel Chai! gold bar also features a number of inscriptions on the reverse. These include the PAMP Suisse logo, a serial number (which matches the number on the protective packaging) and an assay stamp. You can also find details on the weight, purity and content on this side of the bar.

Judaism has existed for over 3,000 years, with the greatest number of Jewish people living in Israel, followed by the United States. There are a great number of texts, practices and dogma that make up the Jewish faith, and it all began with Rabbinic Judaism, which believes that God revealed a number of commandments to Moses on Mount Sinai, commandments that all humans are supposed to live by. There have been many branches of Judaism over the years, with Orthodox Judaism currently being one of the largest. This religion was founded in the Middle-East, with Israel, and in particular the city of Jerusalem, considered the home of the Jewish people. This is why they are often referred to as the “Children of Israel”.

The Jews have experienced more repression and persecution than any other religious group. Most of this stems from the belief that the Jews killed Jesus (even though he was Jewish himself) and it has led to countless massacres over the years, the most horrific of which was the Holocaust. Yet despite all of this, Jews are still strong and they remain faithful. And this is thanks to statements like “Am Israel Chai!” and the weight that it carries.