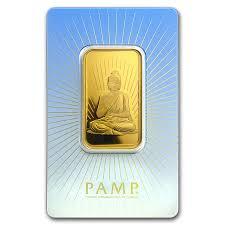 PAMP Suisse is one of the biggest names in precious metals and its bars are highly prized. In addition to their classic designs, including the iconic Lady Fortuna bars, PAMP Suisse has also released a line that features religious motifs. This particular bar depicts the founder of Buddhism, a religion that began over 2500 years ago in what is now Nepal (but was then a part of India).

This bar will appeal to the some 500 million people that follow the Buddhist religion, but it will also appeal to the large number of Westerners that fill their homes and gardens with Buddhist symbolism, including statues of the Buddha himself.

The obverse of this 1 ounce gold bar features an iconic image of the Buddha. He is sitting in the lotus position, with one hand held up and the other hand tucked into his body. He is wearing a robe, common in all Buddhist schools, and he is meditating. Although original, this depiction is common and has been represented many times over the years. It shows Buddha during the meditation that he undertook in order to achieve enlightenment.

As well as the original image engraved on the obverse, this 1 ounce bar also features a number of inscriptions, which can be found on the back of the bar. This includes an assay stamp and a unique serial number, both of which verify that this bar is what it says it is and was produced by PAMP Suisse. The PAMP logo can also be found on this side of the bar, along with details showing the purity, weight and size.

The bars are individually sealed in PAMP’s iconic slabs. These keep the bars safe and secure and all of them come as sealed by the manufacturer. This slab also comes with an assay, a serial number that matches the one on the bar, and some other details.

The Buddha is the founder of the Buddhist religion. He lived around 500 BCE and although he was born into wealth and prosperity, he adopted an ascetic existence. He devoted his life to attaining a state of enlightenment, known as “Nirvana”, which he is said to have achieved by meditating under a Bodhi tree.

The word “Buddha” actually means the “Enlightened One” and it was not given to him until he had attained this state at about the age of 35. Prior to that his full name was Siddhartha Guatama, but following his enlightening meditation he became known as Guatama Buddha or simply “Buddha”.

The word “Buddha” has actually been given to many other Buddhists who have achieved a similar enlightened state. In the west, it is common to see this name attached to a statue of a smiling, rotund man, often sitting in a lotus position. This has led to a misconception, with many believing this man to be the original Buddha. In fact, this is a depiction of a deity named Budai, also known as the “Laughing Buddha” or the “Fat Buddha”. He is actually believed to be a creation of Chinese Folklore and probably never existed.

The Buddha shown on this bar most definitely did, and his teachings have since spread throughout Asia and the rest of the world.