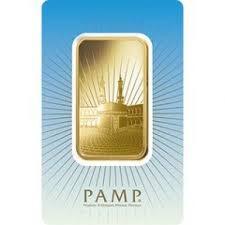 The religious series from PAMP Suisse celebrates the world’s biggest religions, depicting key ceremonies, religious leaders and deities, and much more. This particular bar was created to celebrate the religion of Islam and one of their holiest days and locations in particular. Between 1 in 5 and 1 in 4 people is Muslim, which accounts for a total of around 1.6 billion people. Gold has also played a big role in this religion since its origins, making this a highly sought-after piece amongst Islamic investors, as well as those non-Muslim investors who appreciate quality and attention to detail.

The obverse of this bar depicts an astonishing scene, with the majestic and powerful Ka’Bah standing tall and imposing, and with millions of followers, minuscule in comparison, praying before it. This artwork is original and was created exclusively for PAMP Suisse, but it depicts an image that has been the subject of many photographs over the years. This scene is further enhanced by delicate shading, which helps to accentuate the image, and the introduction of lines, which make the Ka’Bah look like it is sending those millions of prayers direct to the heavens.

This bar comes in a secure package that is sealed at the mint. This is PAMP’s own CertiPAMP secure packaging, which helps to verify that the bar you have is what it says it is and has not been tampered with in any way.

On the reverse of the Ka’Bah gold bar you will find a number of inscriptions. These include a serial number, which matches the one included on the CertiPAMP packaging, and it also includes inscriptions that detail the weight and the purity of the bar. This side of the bar also contains the PAMP Suisse logo and an assay stamp.

The city of Mecca is the most important city in the Muslim religion. Located in Saudi Arabia, Mecca is said to be the birthplace of Mohammad and it played a huge role in the formation of Islam and the creation of the Islamic holy book, the Quran.

Every year, during both the Hajj (the “Greater”) and the Umrah (the “Lesser”) pilgrimages, Muslims flock to Mecca in the millions. It is actually a duty for Muslims to undertake the Greater Pilgrimage at some point in their lives, and it forms what is the largest annual gathering of people anywhere in the world.

This gathering is depicted on the obverse of the Ka’Bah gold bar. The “Ka’Bah” or “Kaaba Muazzama” is the building shown in this engraving. It is a building at the center of Islam’s most sacred mosque, where the pilgrims gather.