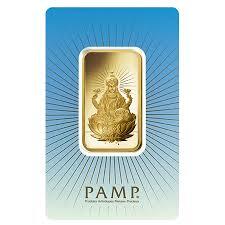 Lakshmi is the Hindu Goddess of wealth and prosperity, a perfect fit for a gold bar. This 1 ounce gold bar is part of a series of PAMP Suisse creations that celebrate the religions of the world, with Hinduism, practiced by about 1 billion people worldwide, the focus of this particular bar.

PAMP Suisse is no stranger to Goddesses of wealth and prosperity. In fact, their most iconic design is of Lady Fortuna, the blindfolded Roman Goddess of wealth and fortune, featured on countless gold and silver PAMP bars over the years.

The Lakshmi gold bar provides 1 ounce of .9999 gold, with an assay stamp and certificate to verify its purity. This bar comes in a CertiPAMP package, which is a sign of quality and authenticity that is widely recognized.

This package displays some of the details that are found on the bar, which helps investors to verify that the bar belongs to the package and that it is what it claims to be. This package is actually sealed at the mint and minimizes contact that handlers, shippers and dealers have with the bar, ensuring that it makes it to the consumer in mint-perfect condition.

The Lakshmi design is on the obverse of this 1 ounce gold bar. This design was created exclusively for PAMP Suisse, but the image is commonly found throughout the Hindu religion. This intricate design shows Lakshmi sitting in a lotus flower surrounded by prosperity, as depicted by the wealth of gold coins falling in front of her.

On the reverse of the Lakshmi bar you will find a number of inscriptions, including the weight of the bar and its purity, as well as the PAMP Suisse logo, an assay stamp and a unique serial number.

Lakshmi represents both material and spiritual prosperity and therefore plays a huge role in the Hindu religion. She is often depicted with four hands, each one of which represents one of the main goals of life. According to ancient scripture, all women are embodiments of Lakshmi. She was married to Vishnu, one of the main deities of Hinduism, and this relationship plays a big role in Hindu weddings and other ceremonies.

The Hindu religion is unlike any other major religion in the sense that it has no single founder. Christianity has Jesus Christ, Islam has Mohammed, Buddhism has Buddha. There is often someone whose life or teachings precipitated the religion, but that is not the case with Hinduism, which celebrates many gods. There are also no agreed-upon rules or scriptures, but some elements of the religion date back many thousands of years, making it the oldest in the world.

A representation of Lakshmi can be found in other religions, with slight variations on this goddess used in both Buddhism and Jainism. In modern times, Lakshmi plays a significant role in the Diwali festival, which is the biggest festival in the Hindu religion. During this festival (which is celebrated in Autumn in the northern hemisphere and Spring in the southern hemisphere) worshippers pray to Lakshmi, among other deities.