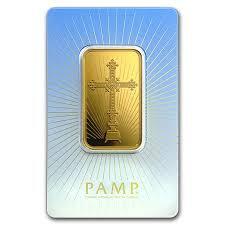 There are 2.2 billion followers of Jesus Christ in the world, making Christianity and all of its branches the biggest religion on the planet. All of those will appreciate the attention to detail that has gone into this Romanesque Cross, part of a PAMP series that celebrates the biggest religions in the world. Although this cross and style is most commonly associated with Catholicism (of which there are about 1.2 billion followers) it is also based on an architectural style that was popular in Medieval Europe, a time and a place when the Christian God was revered and the Church was the biggest land owner and influence.

PAMP’s minted ingots are well regarded throughout the bullion industry, and these bars undergo the same strict quality control procedures that are applied to everything they mint. These bars contain 1 ounce of pure .9999 gold, minted to a uniform shape and structure before being encased in a protective packaging known as CertiPAMP. This tamper-proof packaging is sealed at the mint. It also contains a serial number and an assay certificate, both of which help to authenticate the purity of this bar and to verify its quality.

The Romanesque Cross from which this bar gets its name is featured on its obverse. This is surrounded by neatly engraved lines, which makes the cross look like it is emitting a heavenly light. The artwork is unique, created exclusively for PAMP Suisse, but it depicts something that can be seen in countless churches.

On the flip side of the bar you will find a number of inscriptions. These include the PAMP Suisse logo at the top. Below are details that describe the weight, the purity and the content of the bar, while the bottom of the reverse side contains an assay stamp and a unique serial number. This serial number can also be found on the packaging and in all authentic products both of these numbers will match.

Symbolism is important in all religions and there are a number of symbols and motifs in each and every one of them. In Christianity, the cross is the most common and the most dominant. This is because Jesus, the founder of the religion, is said to have died on the cross. It was actually the Romans that crucified him, but the cross they used would have been nothing like the one seen depicted on this gold bar. This cross was a creation of Medieval architects, who used it to furnish churches inside and out.

The Roman Catholic Church remains a powerful force to this day. It operates out of Vatican City, a walled enclave inside the Italian city of Rome, which was the home city of the Roman empire. Christianity is closely connected to pagan religions and its biggest festivals and celebrations, including Christmas and Easter, are rooted in Pagan rituals. This is mainly because Christianity picked up a lot of cultural practices when it spread throughout Europe and the people responsible for spreading it knew it would be easier to digest for the natives of European countries if it could be tied to festivals and events that were already celebrated.