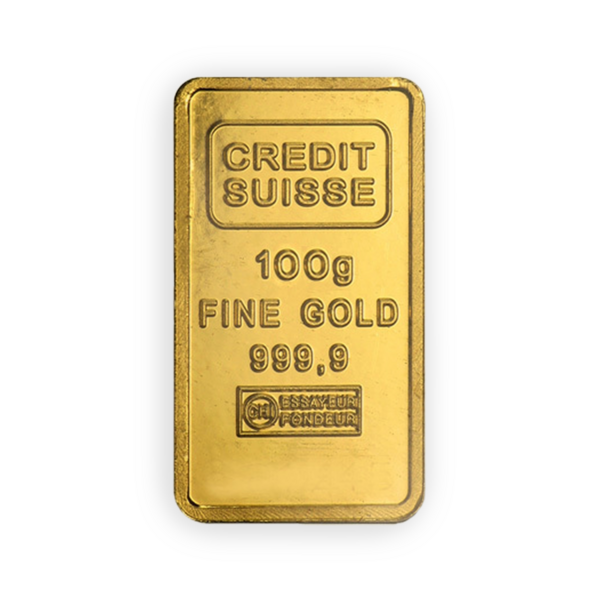 The international financial giant (see below) Credit Suisse includes among its numerous activities the production of gold bullion. The value of a gold bar backed by one of the world’s foremost names in banking is indisputable.

This 100 gram (or 3.2151 troy ounce) 24 karat gold bar represents the epitome of product quality and investor confidence. The bar itself is a thin rectangle with smooth edges and an uncomplicated appearance. This simplicity reduces minting costs significantly, further enhancing its investment value.

The obverse of the bar displays the Credit Suisse name within a rounded corner border and the assayer’s mark (CHI in a circle and “ESSAYEUR FONDEUR”) within a smaller, squared corner rectangle below. The center of the bar’s front reads 100 g FINE GOLD 999,9. You will find the bar’s unique serial number at the bottom. The back of the ingot is covered with an evenly-spaced, repeating pattern of the Credit Suisse logo in its rounded corner bordering, proceeding on the diagonal from the left down to the right.

The 100 gram Credit Suisse gold bar is protected by plastic packaging that also holds the certificate of authenticity. It meets all minimum requirements for purity. It is, without question, one of the most popular bullion products in the world.

Originally known as Schweizerische Kreditanstait or the Swiss Credit Institution, Credit Suisse was founded in 1856 by Alfred Escher to raise private funds for railroad projects. In doing so, as well as in his subsequent development of Switzerland’s electrical grid, Escher emerged as a giant of private enterprise, successfully quashing government efforts to establish public systems in both cases. Expanding into other European nations and other sectors such as insurance and exports, Credit Suisse then executed several aggressive acquisitions and restructurings. By the time of the financial crisis in the 2000s when, like all banking institutions, the firm suffered massive losses, it did not have to borrow from the government. Credit Suisse has made its own brand of gold bars available to investors around the world since 1979. They are produced at the Valcambi refinery in Switzerland.