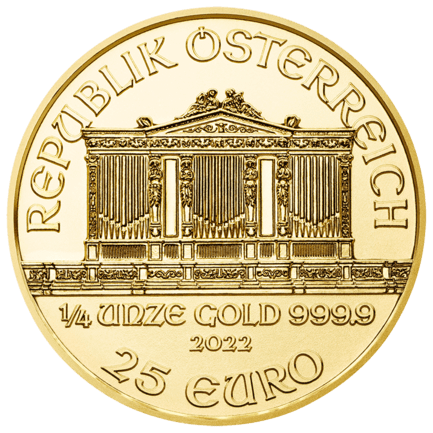 The Vienna Philharmonic coin in 1/4 ounce gold: First issued in 1989 along with the 1 ounce version, it is popular as a gift.

The coin was designed by Thomas Pesendorfer, the Austrian Mint’s chief engraver. For the reverse side he chose eight characteristic orchestral instruments: four violins either side of a cello in the foreground and the Viennese horn, the bassoon and the harp behind. The obverse side features the famous pipe organ from the Goldener Saal of the Viennese Musikverein, recognised throughout the world as the backdrop to the Philharmonic’s New Year concerts.

The Vienna Philharmonic gold coin is Europe’s most successful investment coin. The coin’s enduring motif has contributed to its attractiveness internationally.