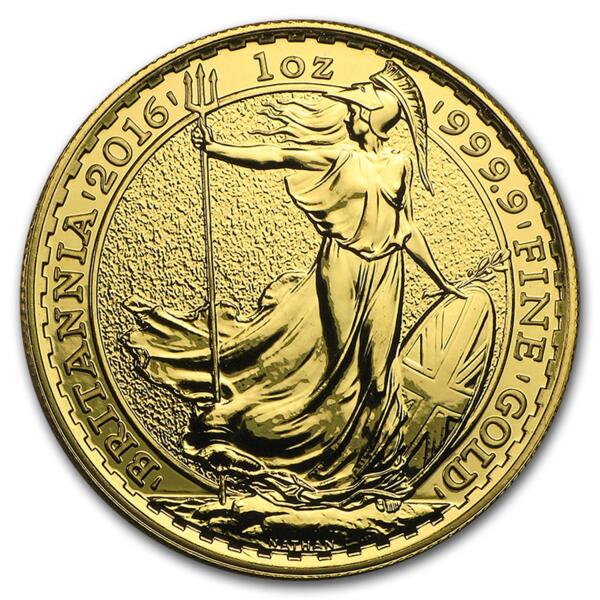 The Britannia is one of the oldest bullion coins still in production, and has served as the backbone of many great collections. Created by the Royal Mint, who have over 1,000 years of history behind them, this is an exceptionally beautiful coin, and one that is struck to a very high standard using the latest minting techniques.

The Britannia is one of the most recognized coins in the world, and collectively, sales of the gold and silver Britannia coins number in the tens of millions every single year.

The Gold Britannia was first minted in 1987 and has carried a face value of £100 ever since.

The actual design of the coin has changed very little over the years. The obverse design, featuring the Queen’s profile, has been tweaked, but the reverse has not. However, because of the addition of copper, Gold Britannia coins produced prior to 2012 are darker in color, with a rose tint that is often referred to as “rose gold”.

The obverse of the 2016 Gold Britannia coin features the latest portrait of Her Majesty Queen Eliz-abeth II. This portrait was created by Jody Clark, whose work has featured on many popular Royal Mint designs. It shows the queen as she is now, depicting her as a strong and noble older woman.

This profile features on all modern British coinage, and may be one of the final portraits of the Queen to feature on British coins.

On the reserve side of the coin is the image of Britannia, a classic image that has remained the same on all versions on the Britannia coin. She stands on the shores of Britain, holding the Union Jack and her trident, ready to protect her country from invaders. Britannia’s image was used on the very first coins to be issued after the formation of the United Kingdom, and it is an image that re-mains closely connected to the history of this nation.