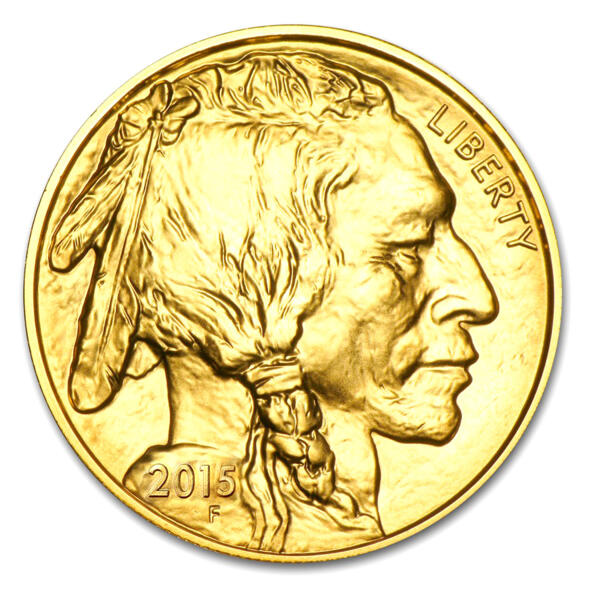 The Gold Buffalo is a gold bullion coin minted by the United States Mint, featuring a celebrated design that once adorned the Indian Head Nickel coin and was engraved by James Earle Fraser back in 1913. This particular coin was discontinued in 1938, but the design was reintroduced on the first edition of the Gold Buffalo in 2006.

Although it is commonly referred to as the Gold Buffalo, the official name for this coin is the American Buffalo. The coin gets its name from the design on its reverse, which features the American Bison. This design was also engraved by James Earle Fraser in 1913, although some minor changes have been made since then.

Fraser is said to have used a bison known as Black Diamond as inspiration for his design. Black Diamond resided at the New York Zoo and the story that is often related is that Fraser had someone distract the bison while he snuck-in for a quick sketch of the animal’s profile. The Indian head design is said to be an amalgamation of three Indian chiefs, Big Tree, Iron Tail and Two Moons, all of who modeled for Fraser.

The Gold Buffalo coin also features a inscription showing the face value, the weight and the purity, along with the words “UNITED STATES OF AMERICA” and the motto “E PLURIBUS UNUM”, which is Latin for, “Out of many, one.”

This Gold Buffalo coin is popular all over the world, but because of its connection to their history, it is especially relevant to the US audience.

The Gold Buffalo coin was first minted in 2006, and at the time it was the first pure gold coin that the US Mint had created for public use. The coin was minted at a time when gold was on the increase, and close to 340,000 coins were produced in the first year. This number decreased in the years that followed and in 2012 just 100,000 of these coins were minted. What’s more, due to a law passed in 2009, the Gold Buffalo will never again be minted in amounts greater than 300,000.

The Gold Buffalo carries a face value of $50 USD, and is therefore backed by the US government. This makes it legal tender, which carries a number of benefits. In countries and states with capital gains tax, which is a tax charged on the profits you make from the sale of precious metals, you may be exempt. Although this isn’t always the case. In some states sales tax is charged on all non-legal tender coins, which makes coins like the Gold Buffalo invaluable to investors in those states.