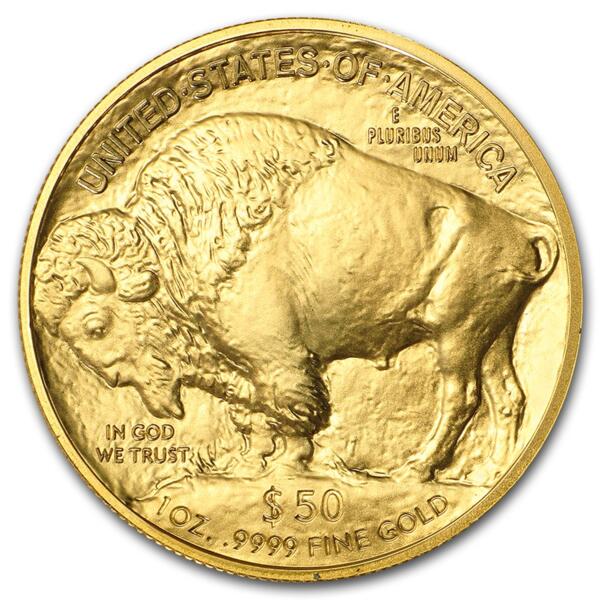 There are many things to be said about the American Gold Buffalo, such as that it was the very first United States 1 oz. coin of .9999 pure gold (2006), that sales in its very first year had to be halted due to enthusiastic demand, and that its historic value demanded its addition to the Smithsonian Institution’s coin collection. What needs to be said is that it is a work of art so somber and sad in its beauty that it should reside in the possession of every serious numismatist or bullion investor around the world.

Taking its name from the noble creature that roamed the plains of North America in numbers too great to count, the image on the reverse side conveys the natural dignity of wildlife, just as the other side depicts the same of the original human inhabitants of our land. Both were designed by the American sculptor James Earle Fraser of Minnesota, who was exposed to frontier life and the experience of Native Americans as a child in the late 19th Century. His monuments and sculptures of Benjamin Franklin, Alexander Hamilton, and General George Patton figure prominently in the landscape of Washington, D.C. With this list of accomplishments, it may still be no exaggeration to say that what became the Indian Head nickel and then the American Buffalo gold bullion coin has touched the hearts of more Americans over the past century than all his other works combined.

The 1 oz. American Gold Buffalo gold piece was created by the U.S. Mint to compete with the 24 karat gold bullion coins being produced in other countries, such as Canada’s Maple Leaf and South Africa’s Krugerrand. It has done so admirably. The obverse side of the coin features the American Indian Head effigy in profile, with LIBERTY at the forehead, the 2018 year of issue on the shoulder, and W (for West Point) mint mark behind the neck. The reverse side’s American Bison has UNITED STATES OF AMERICA and E PLURIBUS UNUM over its back, and IN GOD WE TRUST below the jaw. $50 and 1 OZ. .9999 FINE GOLD are engraved in the ground at its feet. The coin is little more than an inch and a quarter in diameter, and a tenth of an inch thick.

Much is invested in such a small coin, and your wise investment in it can be readily facilitated by our experts at Goldbroker.com.