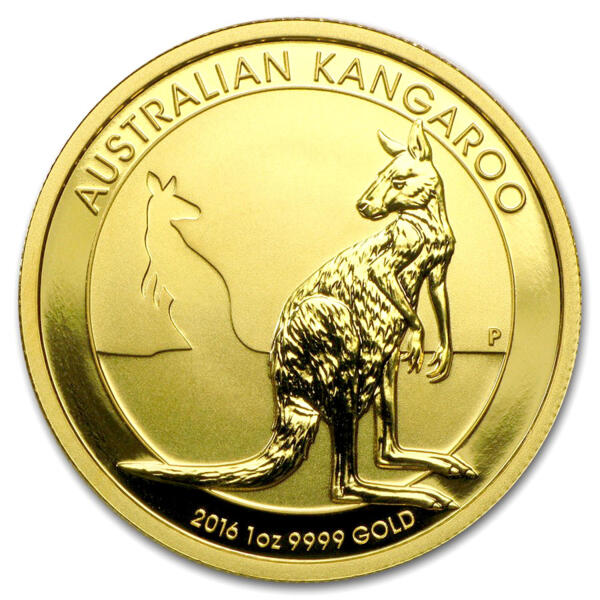 The Gold Kangaroo is a 1 oz gold coin that was minted by the Perth Mint, an Australian mint that is highly celebrated and sought-after all over the world. The Perth Mint are best known for their unique creations, and for the fact that they focus on series of coin — where each release is different from the last and from the next — as opposed to single coins.

This coin comes from the Gold Nugget series, which is also known as the Gold Kangaroo series. This series celebrates the natural beauty of this vast continent, focusing on the kangaroo, a species that is indigenous to the continent and one that is almost synonymous with Australia. The coin features Queen Elizabeth II on one side — as is the case with many Perth Mint creations — and on the other side it features a kangaroo and a silhouette of a kangaroo, a design that shows the elegant beauty of this powerful animal.

The Gold Kangaroo features the highest purity available at .9999 fine gold, and the date of the coin, its purity, weight and the letter “P” (the mint mark) also feature on the coin.

This series is one of the only legal tender coins that changes its design every year, and it is also one of the purest. Although it seems like an odd name now, there is a reason behind it. In 1986, when the first Gold Nugget coin was introduced, it depicted a picture of a real gold nugget. This continued every year until 1989, at which point kangaroos began replacing the gold nuggets. This is why these coins are best known as Gold Kangaroos.

There have been many sizes of this coin minted over the years, from just 1/20th of an ounce, to 1kg. In 2011 a one-off Gold Kangaroo was created to break a record that had previously been held by the Royal Canadian Mint. This gold coin became the biggest and most valuable gold coin in the world, with an estimated value of close to $55 million at the time it was minted. Weighing in at 1 tonne, the coin also had one of the highest face values, at $1 million.

The Gold Kangaroo is guaranteed by the Australian government. As stated on the coin itself, it carries a face value of $100, a statement that is backed by the government and one that essentially means you can trade the coin for $100 should you want to. Of course, the value of the metal in this coin is currently much more than that and will likely remain so for some time. However, this also means that the Gold Kangaroo is classed as legal tender, which has positive implications with regards to capital gains tax.

The Gold Kangaroo is the latest release in a Perth Mint series that has been going strong since the late 1980s. That makes this coin unique, as it was not the same as the 2015 release and it will not be the same as the 2017 release either.