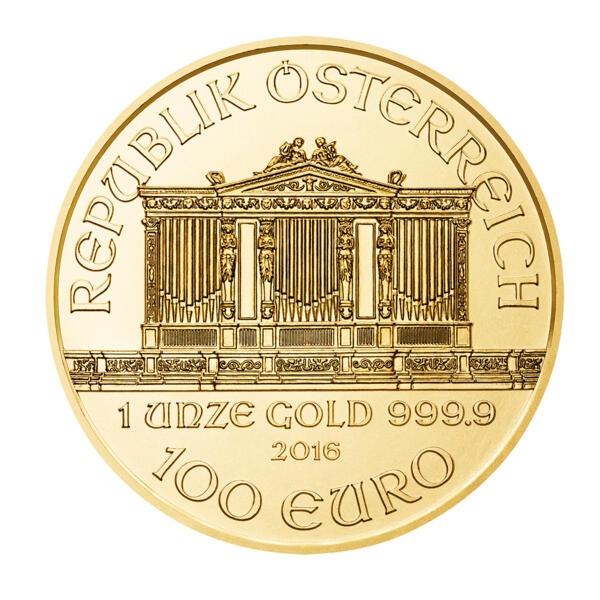 The Gold Philharmonic features an elegant design, with several orchestral instruments on the reverse of the coin (including a Vienna horn and a bassoon) and a Musikverein Pipe Organ on the obverse of the coin, both of which were designed by Thomas Pesendorfer. The coin has a reeded edge and consists of 1 Troy ounce of 0.9999 fine gold. It has a face value of 100 Euros and it is currently the only gold bullion coin that carries a face value in Euros. However, it is only legal tender in Austria.

That doesn’t stop this coin from being popular with global investors though, and nearly 3 to 4 of every 10 Gold Philharmonic coins sold are sold in Europe. The rest of these are sold everywhere from Japan and Canada, to here in the United States.

The Gold Philharmonic has been in production since 1989, and has since become the biggest bullion coin produced by the Austrian Mint, and one of the few coins they produce that is popular with investors all over the world (including the Ducat). It is also one of the best selling bullion coins in the world, which is thanks in part to its purity and fineness, but also to its intricate design.

The Gold Philharmonic has been minted with both Austrian Shilling and Euro face values, reflecting the change in European currency that occurred during its 20+ year history. Over 350,000 1oz Gold Philharmonic coins were minted in 1989, and in its first decade the mintage amounts of each annual release never exceeded 650,000 and rarely exceeded 400,000. In fact, in 2001 fewer than 55,000 were minted.

When the switch to Euros was made, fewer than 200,000 coins were minted every year until 2008, after which they averaged 500,000 a year. This is much less than the Silver Philharmonic, which had a mintage of close to 18 million in 2011 and averaged around half that amount in other years.

The 2016 Gold Philharmonic coin uses the same design as the 1989 version. The only things that have changed on this coin over the years is the face value, which moved from Shillings to Euros.