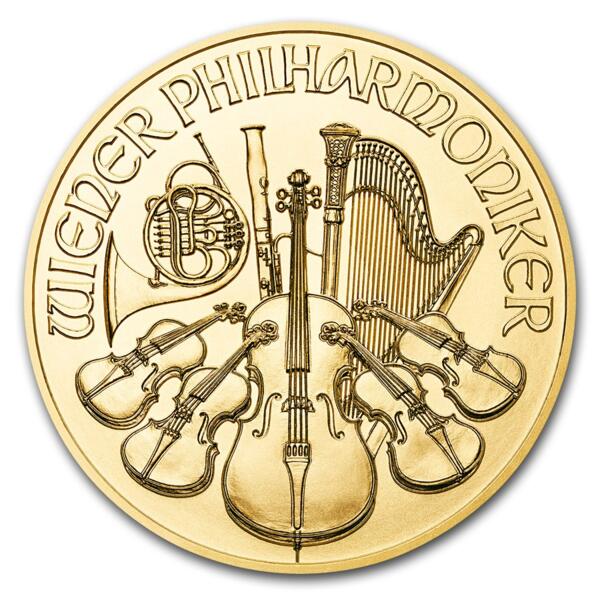 From the International City of Music, consistently ranked as having the highest prosperity and quality of life in the world, comes one of the most popular bullion coins of our generation. Vienna is also home to the Austrian Mint, located since 1835 in the central city district of Heumarkt, as well as the Wiener Musikverein and its Great Hall, considered one of the finest concert venues in the world. This, in turn, is home base for one of the finest orchestras in the world, the Vienna Philharmonic, which is honored on this splendid coin. The Gold Philharmonic enters its 29th year as a perennial best-seller, topping all of its many worthy competitors in 1992, 1995, 1996, and 2000. Clearly, it is no novelty item. The coin’s design has remained exactly the same (except for year of issue) since its introduction in 1989. This is an investment for those who appreciate old-world wealth and classicism. Goldbroker.com is proud to offer you the Gold Philharmonic coin, in rolls of 10, directly from the Austrian Mint.

The success of the Philharmonic coin is in no small part attributed to its award-winning design by the Austrian Mint’s chief engraver, Thomas Pesendorfer. While coins around the world often feature the work of different designers for the two sides, Mr. Pesendorfer accomplished the work for both sides of the Philharmonic. The obverse displays the pipe organ of Vienna’s great concert hall, framed by the German words REPUBLIK ÖSTERREICH, 1 UNZE GOLD 999.9, 2018, and 100 EURO. (This has been its value since the adoption of the euro in 2002. In the old currency, face value was 2,000 Austrian schillings.) The reverse states WIENER PHILHARMONIKER over the design of musical instruments: the cello, four violins, a Vienna horn, a bassoon, and a harp. The coin contains one troy ounce of .9999 fine gold, and measures 37 mm (1.45 inch) in diameter and 2 mm (.08 of an inch) in thickness with a reeded edge. Timeless style. Timeless value, in what has been called “certainly one of the most reliable bullion coins in existence.” (Coinweek.com, January 2017)