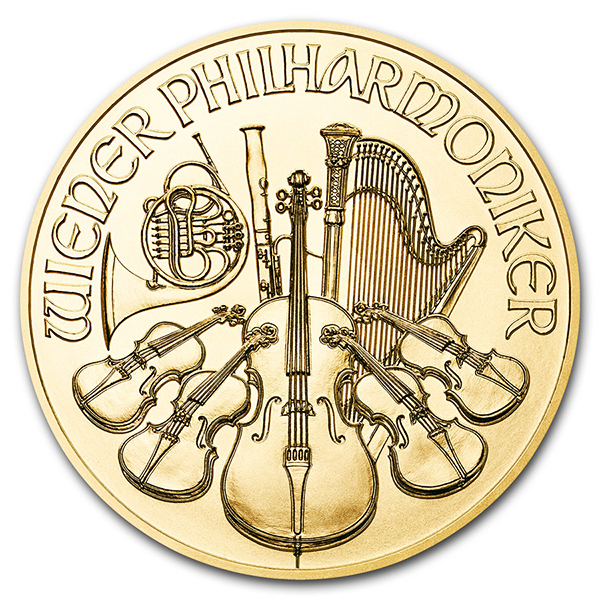 First issued in October 1989, the Vienna Philharmonic gold is Europe’s most successful bullion coin. According to the World Gold Council, it was the best selling gold coin in the world in 1992, 1995, 1996 and 2000.

The coin’s design by Thomas Pesendorfer, the Austrian Mint’s chief engraver, has remained exactly the same (except for year of issue) since its introduction in 1989.

The obverse side features the famous pipe organ from the Goldener Saal of the Viennese Musikverein, recognized throughout the world as the backdrop to the Philharmonic’s concerts. Above the organ, the words REPUBLIK ÖSTERREICH stand in a semi-circle, while the weight, 1 UNZE GOLD, and purity of the coin, 999.9, with the date of issue below, 2019, stand beneath the balustrade of the organ. At the bottom edge of the coin appears its face value, 100 EURO. The edge of the coin is reeded.

The reverse states WIENER PHILHARMONIKER over the design of eight characteristic orchestral instruments: four violins either side of a cello in the foreground and the Viennese horn, the bassoon and the harp behind.

Certainly one of the most reliable bullion coins in existence, the 2019 Gold Philharmonic is an investment for those who appreciate old-world wealth and classicism.