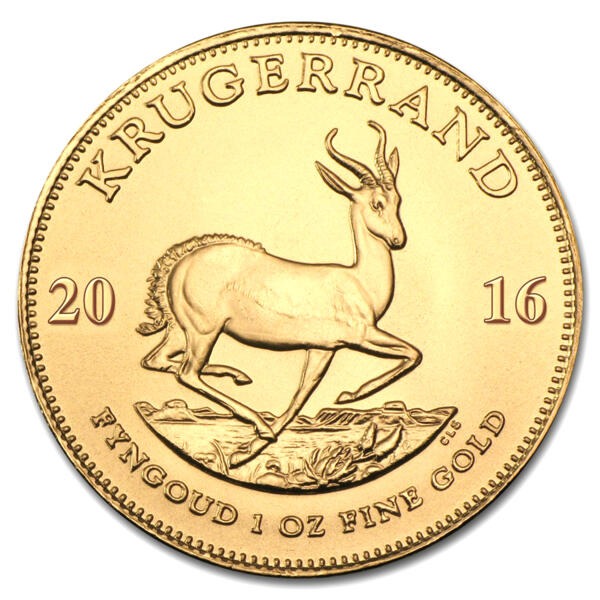 The Gold Krugerrand is one of the most recognized bullion coins in the world, and one that is a must for the portfolios of all investors and collectors. This 1 ounce gold coin is minted in South Africa by the South African Mint. It takes its name from Paul “Kruger”, the first South African president, and from the South African currency, the “Rand”.

The obverse of the Gold Krugerrand is a profile of Paul Kruger, a design that was engraved by sculptor Otto Schultz, and one that is still used on modern versions of this coin. The words around the edge of the obverse read “SUID-AFRIKA-SOUTH AFRICA”, with “SUID-AFRIKA” being the name of the country in the native tongue, Afrikaans.

On the reverse there is an antelope known as a springbok, which is native to Southwestern Africa (this is why the South African rugby team are known as “The Springboks”). This design was created by Coert Steynberg. The word “KRUGERRAND” is also inscribed on this side of the coin, as is the weight of gold in the coin, along with the year it was minted.

One of the most notable things about the Gold Krugerrand is its color. It has a slightly darker color than most gold coins, which is down to the inclusion of a small amount of copper. This increases the weight to above 1 Troy ounce, but there is still 1 Troy ounce of pure gold in all of these coins, and the addition of copper simply makes for a unique aesthetic.

The Gold Krugerrand was first launched in 1967 as a way to market South African gold to the world, and it certainly accomplished that goal. Within 15 years the Krugerrand accounted for a significant percentage of the gold coin market, with some estimates suggesting that 9 out of every 10 gold coins sold worldwide were Krugerrands.

The mintage of these coins has always varied. In the first few years just 40,000 were minted, and a little over a decade later, towards the end of the 1970s, this had jumped to 6 million coins. The number decreased after that point and although it has increased in stages since then, it has yet to repeat those numbers.

The actual design of the Gold Krugerrand has remained relatively unchanged throughout its production, and the 2016 coin is no different to many previous releases.