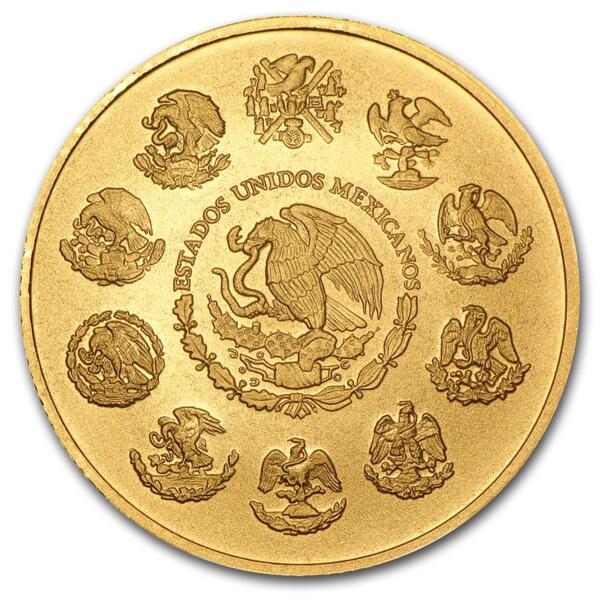 The front side of the coin depicts the winged goddess Victoria on Mexico’s Independence Column (actually located in the Paseo de la Reforma in downtown Mexico City), bordered on each side by volcanic mountains. The top shows the coin’s weight, purity and year of minting. The back side shows Mexico’s coat of arms featuring the country’s national symbol, the golden eagle sitting on a cactus and holding a snake in its beak, and the inscription “Estados Unidos Mexicanos” surrounded by ten smaller coats of arms, reflecting the nation’s history.

Only the third bullion coin ever offered for sale in the world (after the South African Krugerrand and the Canadian Maple Leaf), the Libertad came to life in 1981. At that time, it was 90% pure gold. Since 1991, it has been produced with .999 fineness.
The Gold Libertad has no face value (sometimes resulting in its being called a round) but it is legal tender in Mexico and is produced by the country’s national mint. Its legal tender value can be calculated, based on the current spot price of gold.
Mintage figures vary greatly from year to year. When first produced in 1981, over half a million were minted. The coin did not appear again for an entire decade, and it has since appeared in amounts ranging from the hundreds to few thousands. The 2015 mintage was a mere 1,440.