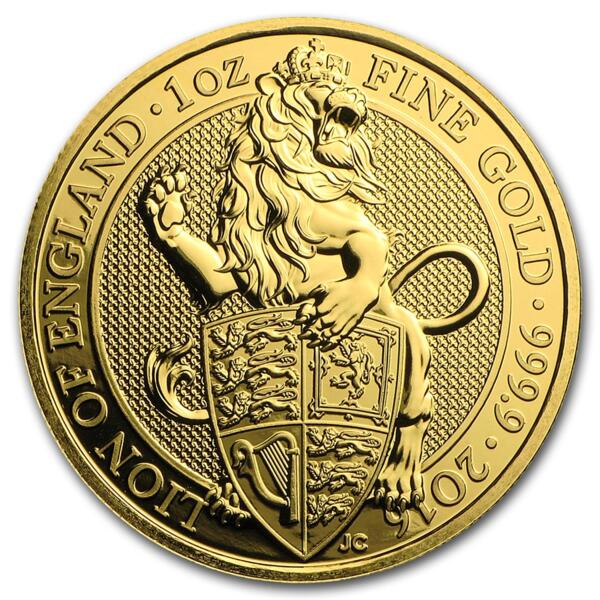 Throughout history British coins have been influenced directly by the Royal family. It is the “Royal” Mint after all, and British coinage wouldn’t look the same without the unmistakable profiles of its kings and queens, as well as other iconic imagery.

In 2016, when the Royal Mint began work on The Queen’s Beasts series of coins, their designers took inspiration from centuries of royal heraldry. They created something that they hoped would showcase the history of this country and its royal family, and they did just that. The first coin to be released in the Queen’s Beast series, the “Gold Lion” or “Lion of England”, is an exceptional piece, and it serves as a charming and nostalgic reminder of the United Kingdom’s past, and of the myths, legends and lineage that makes it what it is.

The Queen’s Beast series of coins takes inspiration from the sculptures of the same name, which were created by James Woodford. These sculptures were created for the Queen’s Coronation back in 1953, and they were placed at the entrance to Westminster Abby. There were ten of them in total, each of which stood at over 6 feet tall, and they are now on display at the Canadian Muse-um of History.

These ten beasts were created to represent the Queen’s genealogy, with the lion, which serves as the inspiration for this 1 ounce gold coin, representing her connections to England. The lion is often considered to be the most significant emblem in English heraldry. Lions have featured on royal emblems since the 12th century. In fact, the royal arms of England, which can also be seen on this coin, features three of them, and this motif has existed since 1198.

The Gold Lion coin was designed by Jody Clark, who is also responsible for the latest representation of the Queen, showing her as a mature, yet dignified leader. This recent profile features on all new British coins, and can also be found on the obverse of the Gold Lion.

This bullion coin weighs 1 troy ounce and is struck in 999.9 fine gold. It has a face value of £100 and is classed as legal tender.

This coin is the first in a series of 10, and each coin will be struck in several denominations and in both gold and silver.