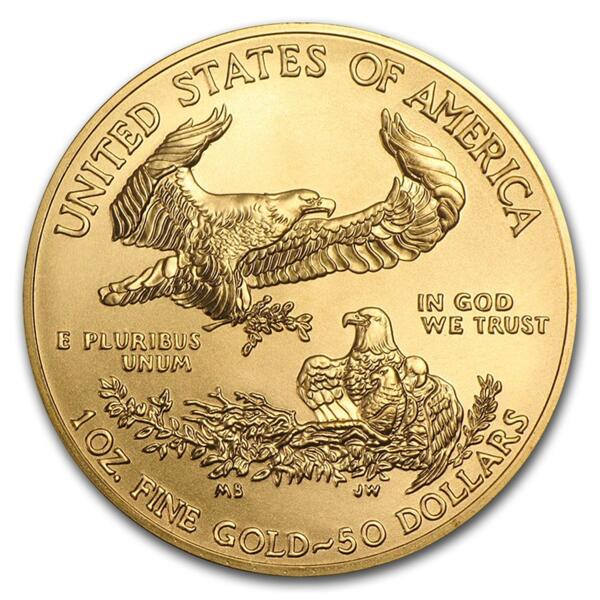 For the 33rd annual release of the proud 1 oz. Gold American Eagle, the United States Mint once again returns with its Walking Liberty design on one side and the Family of Eagles on the other. Struck at the Mint’s West Point facility, it contains one troy ounce of 91.67% 22 carat gold, 5.33% copper, and 3% silver for a gross weight of 1.09 troy ounce, all weights and contents authorized by Congress and backed by the Mint. While showing a face value of $50, its true value is of course much greater, based on the current spot of gold.

The 1 oz. Gold American Eagle was first introduced in 1986 but the “Walking Liberty” theme on the obverse side is borrowed from the New York City sculptor Augustus Saint-Gaudens, who earned fame for his monuments of Civil War heroes, including General William Tecumseh Sherman in Central Park and General John A. Logan and Abraham Lincoln (the Standing Lincoln) in Chicago. His double eagle design for the $20 gold piece in 1907 is considered one of most beautiful ever created, with Lady Liberty striding toward you, torch aloft in one hand and olive branch in the other, the rays of the sun bursting behind her. The Capitol Building is depicted in miniature to the lower left, and she is ringed by 50 stars and the word LIBERTY. 2018 appears on the lower right. On the reverse side, the nest of an eagle with two chicks and the eagle coming in for a landing was designed by Beaumont, TX sculptor Miley Busiek (signified by MB in the left foreground). Above the scene is proudly engraved UNITED STATES OF AMERICA, 1 OZ. FINE GOLD ~ 50 DOLLARS below, and E PLURIBUS UNUM and IN GOD WE TRUST on either side.

The design of the 1 oz. Gold American Eagle spans time from the era of President Theodore Roosevelt to President Ronald Reagan to you in this present day … a fitting continuity of pride and patriotism.