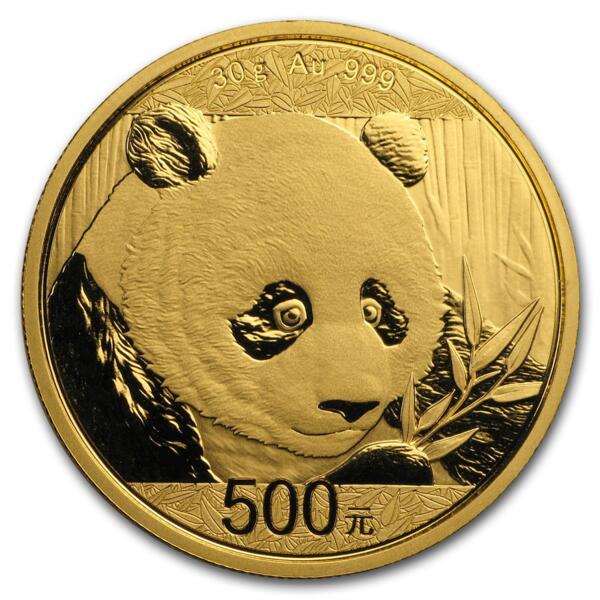 China, in 2016, made the bold move of changing the weight of its bullion coins from the long-held international standard of the troy system to the metric system. This may have been done due to metric being the world standard in larger bullion weights (and practically everything else everywhere but the USA). In the realm of the 1 oz. piece such as this Gold Panda, that means a reduction from 31.1 to 30 grams — the equivalent of 0.9645 troy ounce.

The lesser weight has not measurably affected the overwhelming desirability of the Panda coin, as it continues to sell out, at least in part because Beijing encourages its immense citizenry to invest in bullion products. China is the largest gold market in the world and the yuan continues to make strides toward supplanting the US Dollar as the leading reserve currency. So, while the coin is marginally smaller than the 1 oz. American Eagle, Canadian Maple Leaf, etc, the 1.1 gram difference could be of concern only to buyers of very, very large stacks and this is a highly improbable occurrence on account of the Panda’s low mintage and high popularity. If you would like to add the 30 gram Gold Panda to your investment portfolio or coin collection, we recommend that you place your order with Goldbroker.com without delay.

Another element that enhances the Gold Panda’s allure is its annual change in design on the reverse side. The 2018 version depicts the giant panda holding a bamboo shoot. Above is the weight (30 g) and fineness (Au .999), while below is shown its face value in yuan of 500 ¥. The obverse side design has been the same ever since the Panda came out in 1982 (making it the third-oldest in the world, behind the Krugerrand and Maple Leaf). It displays the Hall of Prayer for Abundant Harvests in the Temple of Heaven, with People’s Republic of China (in Mandarin) above and 2018 below.

While the renderings of the 600-year old temple and perhaps most-adored creature on the planet are not particularly artful, the value of this Chinese Gold Panda, for the numerous reasons given above, is unquestionable.