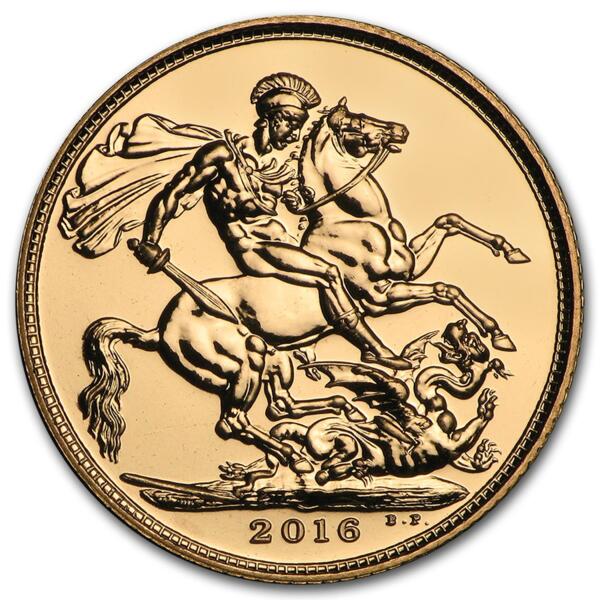 The Gold Sovereign is a long-standing Royal Mint gold coin that is minted in 22 karat gold and features representations of both the modern and historic Britain, with St George and the Dragon on the reverse, and Her Majesty Queen Elizabeth II on the obverse. This coin is minted to bullion standard and is produced with an unlimited mintage.

The Gold Sovereign coin is sold in tubes of ten, all of which are sealed and authenticated directly at the Royal Mint, before being passed on to the customer. This ensures that the coins have passed through fewer hands, limiting their exposure and guaranteeing quality for many decades to come.

In the past, and because of their connection with the British Empire, Gold Sovereigns have been minted by countries such as Canada and Australia, but most of the coins come direct from the Royal Mint (which itself has been stationed everywhere from London to its current base in Wales). In the United Kingdom, Gold Sovereigns are commonly used to create jewelry, with the coins being set into rings. However, these rings fell out of fashion in the 21st century.

The obverse design, which features The Queen, has changed a number of times over the years, with artists keen to match the ever-changing face of Her Majesty. However, the design on the reverse has remained the same since the Gold Sovereign was first minted. This design was created by the distinguished Italian engraver Benedetto Pistrucci, who was the chief-medallist of the Royal Mint at the time.

The Gold Sovereign is considered to be an accessible way to invest in gold, as it is roughly a quarter of an ounce, and therefore cheaper to purchase than standard ounce coins. There are also Half Sovereigns and Quarter Sovereigns available, the latter of which was first minted as recently as 2009.

The weight and the purity of the Gold Sovereign is guaranteed by the Royal Mint, which in turn means it is guaranteed by the British government. The Gold Sovereign also has legal tender status in many countries, which means that profits resulting from the sale of these coins are not subject to capital gains tax. You will need to check with your individual state/county laws to see if this applies to you.

The 2016 release of this flagship Royal Mint coin features the 5th successive portrait of the Queen on the obverse. Her Majesty looks a little older, a little wiser and a little more dignified in this brand new design, which was created by Jody Clark.