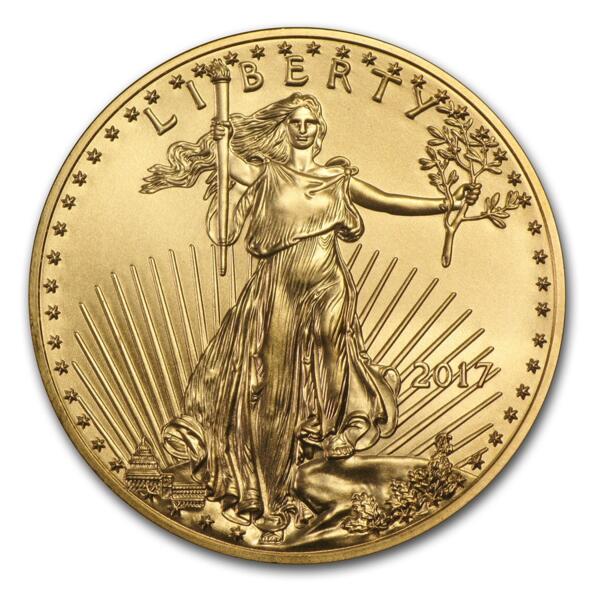 Theodore Roosevelt, the 26th President of the United States, led our country into the 20th Century with progressive policies that shaped modern-day America. He was also perhaps one of the nation’s best-read presidents and drew inspiration from ancient civilizations. President Roosevelt commissioned the great sculptor Augustus Saint-Gaudens and his “American Renaissance” ideals to design coinage that recalled the Greek and Roman empires. His rendering of Lady Liberty has graced the American Gold Eagle bullion coin since its inception in 1986.

The American Gold Eagle features the image of Lady Liberty, hair flowing, holding the torch of freedom aloft in one hand and a full olive branch in the other, striding purposely forward, the sun radiating behind her. The Capitol Building can also be seen in the lower left background. The coin’s obverse is ringed by stars and topped by the word LIBERTY. The other side shows an eagle, holding an olive branch in its talons, coming to land in a nest holding another eagle and its babies. The inscriptions are UNITED STATES OF AMERICA, E PLURIBUS UNUM, IN GOD WE TRUST, AND 1 OZ. FINE GOLD ~ 50 DOLLARS. The coin measures 32.7 mm (1.29 inch) in diameter and 2.87 mm (.11 of an inch) in thickness. Its composition is one full troy ounce of pure gold accounting for .9167 of the content, the rest being a compound of silver and copper to increase durability and protect from contact damage. Legal tender in the USA, the coin’s face value is $50 but its true value to collectors and investors is many, many times higher for not only its gold content but its beauty and symbolism.

The Gold American Eagle is one of our nation’s few official investment grade bullion coins. There has never been a more appropriate time to claim one as your own.