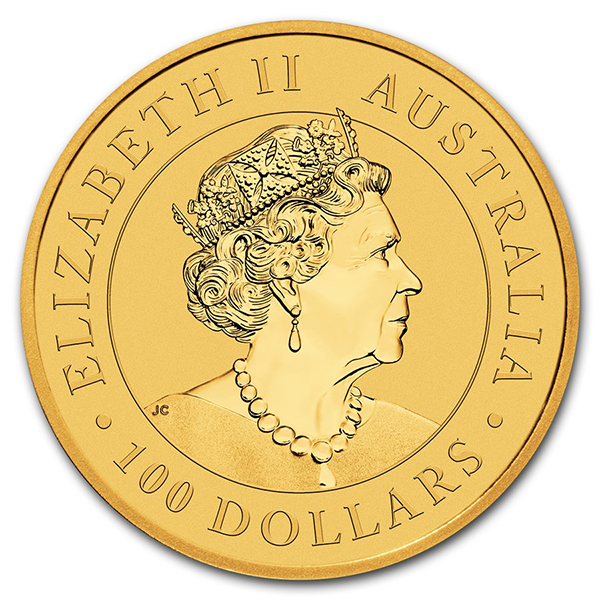 The Gold Kangaroo 1oz is one of the world’s most popular gold coins, thanks in part to its magnificent design that keeps changing yearly since its introduction in 1989.

The reverse of the 2019 edition features a new depiction of Australia’s emblematic animal, the red kangaroo, resting on a grassy knoll. In the background we see the sun, between two leafless trees. The letter P (for Perth Mint) is engraved at the foot of one of the trees. The artwork is surrounded by the inscription AUSTRALIAN KANGAROO at the top, while the date of issue 2019, the weight 1 oz, the fineness 9999, and the metal’s name GOLD, are found at the bottom.

The obverse side features a new effigy of Queen Elizabeth II created by Jody Clark. The sixth portrait of the current monarch to appear on Australian coins since 1952 shows the Queen wearing the Royal Diamond Diadem, recalling the Raphael Maklouf portrayal adopted in 1985. Around it are engraved the names of the Queen and the country of which she is the emblematic leader, along with its legal tender, $100.

This year’s investor Kangaroos also include a security feature in the form a micro laser-engraved letter ‘A’ concealed within the reverse inscription. Only visible through a magnifying glass, this design innovation is intended to make counterfeiting extremely difficult, providing peace of mind to investors.