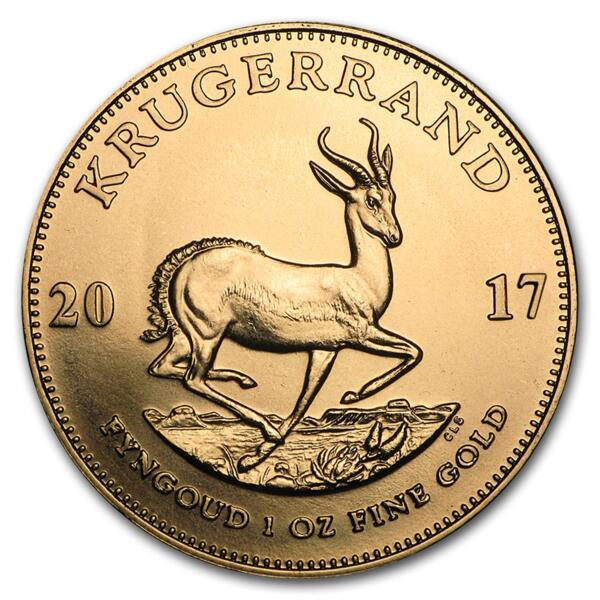 In 1867, 15-year-old Erasmus Jacobs found a shiny stone on the banks of South Africa’s Orange River. Eye-catching but indefinable, the rock passed through many hands before being determined to be a diamond, eventually the “Eureka Diamond” that kicked off the prosperous mining industry that built modern-day South Africa. As recently as 2002, the nation was said to hold about 50% of the world’s gold resources and, 100 years after that teenager picked up a shiny rock, the South African Mint produced the first bullion coin anywhere: the Gold Krugerrand. 2017 marks the 50th anniversary of that momentous event, the introduction of gold bullion coins as an international investment vehicle. The Gold Krugerrand today remains the most widely held bullion coin in the world, and the most traded coin in history.

The 1 oz. Gold Krugerrand is 32.77 mm (1.29 in) in diameter and 2.84 mm (.111 in) thick, in 22 karats with a fineness of 91.67%. Its symbol is the national animal of South Africa: the small, long-legged springbok antelope. This image is surrounded by the words KRUGERRAND and FYNGOUD 1 OZ FINE GOLD. The year on this coin is 2017, the numbers separated on either side of the animal. The observe side displays the profile of the man whose name was given to the Krugerrand: the South African republic’s first president Paul Kruger. This engraving is very simply surrounded by the country’s name in two of its 11 official languages, Afrikaans and English: SUID-AFRIKA and SOUTH AFRICA.
Like the 15-year-old boy looking down at a diamond 150 years ago, you may hold something of real value in your hand: a brand new and authentic South African Gold Krugerrand.

Although legal tender in South Africa, the Krugerrand coin has the distinction of not carrying a face value. Its legal tender value is set by the price of gold in South African rands and is related to the prevailing value of their fine gold content. Krugerrands are, in the words of the law, "... legal tender, in the case of gold coins in payment of any sum the value of each gold coin and discount equal to the net asset value at which the bank is willing to buy this piece of gold on the day of the said submission thereof;" (South African Mint & Coinage Further Amendment Act No. 40 of 1966 published 12 October 1966).