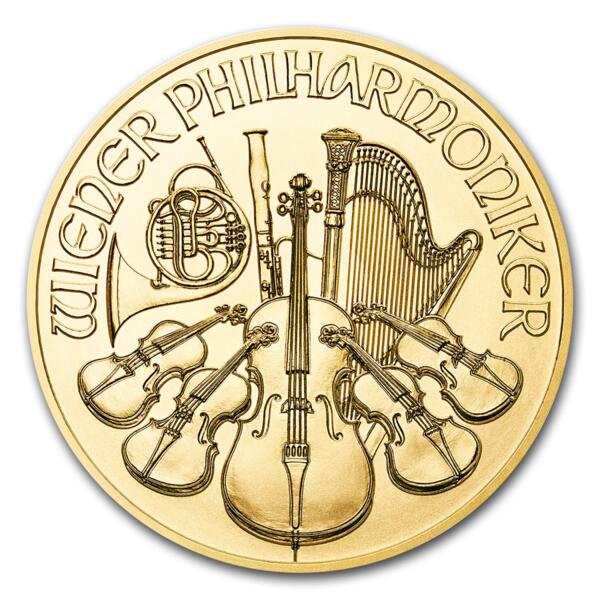 Vienna Philharmonic bullion coins first appeared in gold in 1989 with a face value of 2,000 Austrian schillings. Since 2002, the Gold Philharmonic has had a nominal denomination of 100 euro, as part of the European Union. But its design has not changed, reflecting the great musical heritage of the nation, depicting the great pipe organ of Vienna’s great concert hall, the Musikverein, which opened in 1870. With its fine acoustics, shaped before the advent of modern architecture, it is considered one of the finest concert halls in the world and is home to the Vienna Philharmonic which lends its name to this superb gold coin, also a world leader … in terms of sales.

The design of the Gold (and Silver) Philharmonic coin remains unchanged from year to year, except for the year of mintage itself. The image of the pipe organ is topped by the German words REPUBLIK ÖSTERREICH, while below is written 1 UNZE GOLD 999.9, 2017, and 100 EURO. The reverse shows classical instruments centered by a cello, flanked by four violins, a Vienna horn, a bassoon, and a harp. The name of the orchestra (and the coin) curves along the top: WIENER PHILHARMONIKER. It contains one troy ounce of .9999 fine gold, and measures 37 mm (1.45 inch) in diameter and 2 mm (.08 of an inch) in thickness.

Over its 28-year history, the Gold Philharmonic has been one of the world’s best sellers, finishing four times at the very top of the list.