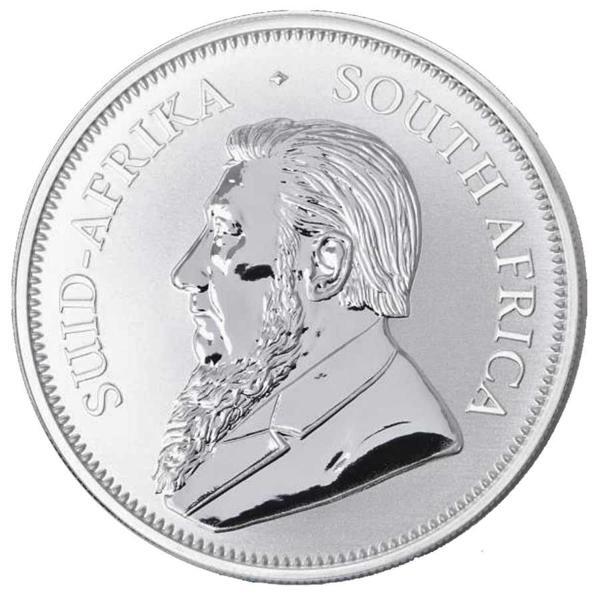 As part of its commemorations for the 50th anniversary of the world-leading Gold Krugerrand, the South African Mint introduced the 1 oz. Silver Krugerrand. The limited-edition first issue stimulated sufficient market demand for them to follow it up in 2018. The new coin features sharpness of detail afforded by the latest computer-assisted technology and laser etching. While the gold coin has shown no face value (the pragmatic South Africans prefer to emphasize that the coin’s value is its metal value) for all of its 50 years, it took its name from the country’s unit of currency, the rand. Herein lies another significant departure with the silver Krugerrand: it bears the denomination of 1 rand (R1), an appropriate sum for the nation that introduced the bullion coin to the world for the purpose of making precious metal accessible to the common man.

The pronking springbok brings the Krugerrand, silver and gold, to life. The work of South African sculptor Coert Steynberg (who also designed the statue of Paul Kruger at the gate of the famous National Park) depicts the striped, long-legged antelope leaping on the back side of the coin, surrounded by the words KRUGERRAND and FYNSILVER 1 OZ FINE SILVER R1. The year is indicated by the numbers 20 and 18 on either side of the animal. Kruger’s bearded profile, originally fashioned by German die cutter Otto Schultz well over 100 years ago, is ringed by the country’s name in two of its 11 official languages, Afrikaans and English: SUID-AFRIKA and SOUTH AFRICA.

The iconic and historic importance of the Silver Krugerrand, combined with its beauty and craftsmanship, make it a choice that’s proven very hard for collectors to resist. A full troy ounce of 99.9% silver makes it a simple and solid investment, fulfilled for you by Goldbroker.com.