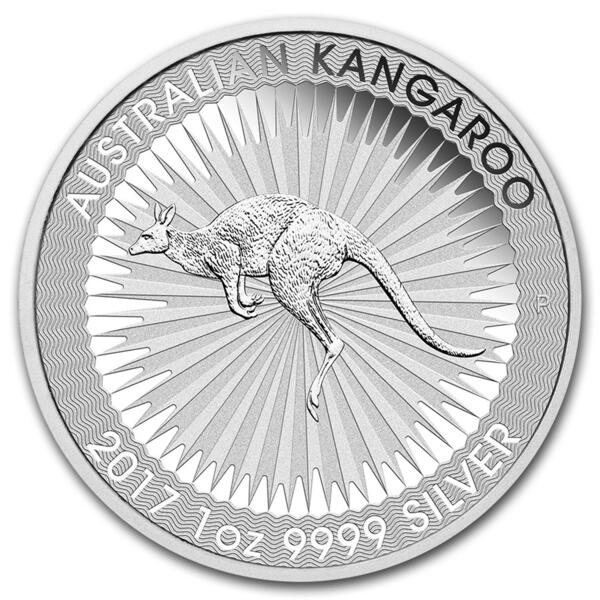 The Perth Mint “struck gold” with its first pure silver bullion coin in 2016, selling over 11 million of them and encouraging the Australian mint to release its 2017 version ahead of schedule. That’s a stunning success for an institution that’s been a world leader in coin minting for the past three decades. In fact, it’s produced some 51 million bullion and numismatic coins in that time. Now look again at the Silver Kangaroo’s numbers from 2016: 11 million of them alone. You owe it to yourself to find out why this Kangaroo is selling in “leaps and bounds.

The 2017 Australian Silver Kangaroo depicts the Land Down Under’s red kangaroo in a design based on the very first Perth Mint coin series in 1989. The nation’s quintessential fauna symbol is shown in mid-jump against a radiating background. It’s encircled by the words AUSTRALIAN KANGAROO and 2017 1 oz 9999 SILVER. On the right border, you will see the letter P, representing Perth. And the first A in AUSTRALIAN contains another micro laser engraved A, visible only through magnification. This is your proof of authenticity and protection against counterfeit. The obverse side of the coin features the likeness of Her Majesty Queen Elizabeth II by British sculptor Ian Rank-Broadley, who has been designing coinage for the United Kingdom and Commonwealth nations since 1997. His initials appear below the Queen’s effigy, which is surrounded by the words ELIZABETH II and 1 DOLLAR.
The 2017 Silver Kangaroo is legal tender in Australia, and a fine follow-up to the Perth Mint’s record-shattering 2016 release. It is sealed with a holographic security strip that detects any hint of tampering from the time it leaves the production facility. That’s how we ship it directly to you.