Egon von Greyerz, founder of Goldswitzerland.com (Matterhorn Asset Management AG) and member of the board of directors of Goldbroker.com stated that the Fed may increase QE a shocking ten times in coming years. He also provided a fantastic gold chart.

As we discussed last week I was expecting gold to make a low this week. So far we had a closing low on Wednesday at around $1,564. We will see if that holds. As always, in these cases where we have some kind of cycle low there is always price action that cements that low.

First of all, every day around the open or just before the open we have seen on the NYMEX the price of gold has been pushed down, which is clear paper manipulation of the price. Then, of course the Fed minutes came out with some of the members saying that the Fed should stop QE. Well, in my view that is absolute nonsense.

It’s not possible to stop QE with a federal debt of $220 trillion, including unfunded liabilities....

The cash deficit every year is currently running at $1.5 trillion, but if you include unfunded liabilities, the accounting deficit totals $6 trillion each year. How can they ever stop QE? You look at the banking system, they can only survive by valuing their toxic assets at phony values.

Even student loans now total above $1 trillion, and the default rate currently amounts to 23%. Some colleges have a default rate as high as 60%. As youth unemployment increases, default rates will average 50% in my view. If you look at Social Security, there are over 125 million on benefits, including food stamps.

I wouldn’t be surprised to see at least 150 million people in need of government assistance or standing in front of soup kitchens in the next few years.  All the while the Fed will be signaling the end of QE. So there is nothing in the US that’s pointing to any improvement or anything that would allow for QE programs to cease.

One thing that’s worried me and it continues to worry me is the divide between the rich and the poor. It’s increasing continuously in the US and in the rest of the world. The poor in the US and Europe are having trouble making ends meet, and this is a very, very dangerous trend for the world.

Interestingly enough I was at a family office conference recently and this confirmed that the rich are still very rich, and they are buying all of the conventional assets, stocks, property, private equity, wines, art, etc. But very few of them had any significant exposure to gold. There will be a massive wealth destruction because many of the assets which have been financed by credit bubbles around the world, they will plummet massively in real terms.

If we move to the eurozone things are just getting worse. The European Commission admitted that what they expected to be growth in 2013 is not going to be happening. But optimists as they always are, they now say it will happen in 2014. Well, there is absolutely no chance there will be growth in Europe in 2014.

The problems in Europe are still massive. When you look at Spain as an example, the financial system is crumbling. Bankia, which is the bank that was created by all of the mergers in 2010, and subsequently saved by the government, is about to announce its biggest loss ever. They are not even valuing their assets at real market value. There are 3 million empty houses in Spain as an example.

We also just had the second biggest bankruptcy ever announced in Spain. So with unemployment at 27% overall, and roughly 60% for the youth, Spain is in an absolute mess and is not going to improve. The government’s borrowing rate should be 50% or more, and yet they are still able to borrow at 5%. In fact, they couldn’t borrow any money without the ECB’s help.

You have a very similar situation in Italy, Greece, France, and the UK will be next. The ECB had been upbeat about the expected repayment of the LTRO, but the repayment was only half of what they expected because the reality is the banking system is still under tremendous pressure.

The gold market will very soon begin to reflect the money printing that is guaranteed to happen in 2013. I could easily see the Fed moving from $85 billion each month to a number ten times that amount in coming years. This number could well grow to $850 billion each month from the Fed over the next few years, and that’s just on the US side.

When we discuss gold going up dramatically in a short period of time, most people think it can’t happen. We’ve talked about the next targets of $4,000 to $5,000, and people in the mainstream media would say that’s crazy. But below I am showing a chart of the 1979 to 1980 gold price action. 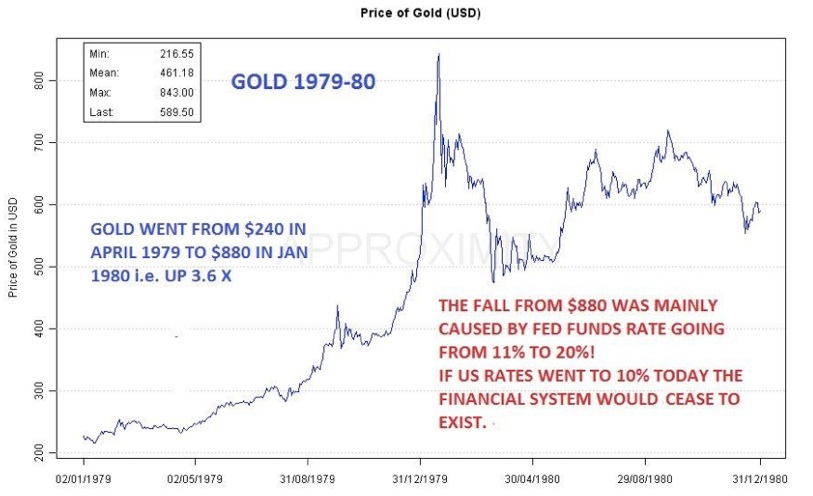 In 1979, in April, gold was $240, and in January of 1980 the price extended above $850.   Gold went up roughly 3.6 times in price in a matter of months.  So it is very possible that once this market starts moving that we will see a very fast move.  I could see this type of move being repeated in the next twelve months in terms having a very explosive move to the upside.

After gold had that speculator move, Volcker came in and dramatically increased interest rates because inflation was spinning out of control, and subsequently the gold price fell. But that is very unlikely to happen this time because it would bankrupt the government.  The market will eventually push interest rates up.

Investors just need to be patient. This move will happen. We have been in a 17-month consolidation and this is quite normal in bull markets.  All this type of action does is build massive energy for the next move. So investors simply need to sit tight and hold on to their positions in gold and silver.

Time is on the side of the longs, and solidly against the bears.