Fundamental and technical factors for gold are now in total harmony and gold is entering a virtuous circle that will drive the price up at its fastest pace since this bull market started in 1999.

- It is a fact that gold in US dollars (and many other currencies) has gone up 400% in eleven years or 16% per annum annualised.

- It is a fact that the dollar and most other currencies have gone down 98-99% against gold since 1913 when the Federal Reserve Bank of New York was created.

- It is also a fact that the Dow Jones (and many world stock markets) has declined over 80% against gold since 1999.

- It is a fact that gold has made a new all time monthly closing high in dollars in August 2010.

We expect gold to start a substantial rise now which will continue for 5-10 months before any major correction. Gold’s technical picture is extremely strong with a continuous rising pattern of higher highs and higher lows with the steepness of the curve increasing. From much higher levels we are likely to see a correction that could last up to a year before the next rise which will last several years before we see a significant peak. Once gold has topped we do not expect the same kind of decline as after the 1980 peak since gold is likely to become part of a future reserve currency. At that point gold will be a solid but unexciting investment with very little upside potential. But that is likely to be a few years away.

In spite of a 5 times increase in the value of gold or an 80% decline against many currencies and stockmarkets in the last 11 years, most investors own no gold and still do not understand the importance and value of gold. In a world of constant money printing and credit creation leading to devaluing currencies and devaluing assets, gold reflects stability and is virtually the only store of value that cannot be destroyed by governments.

The average asset manager, fund manager, pension fund or private individual owns no physical gold and at best has a very small exposure to some precious metals stocks. And in spite of this gold has gone up over 400% in 11 years. How is that possible? For the simple reason with the relatively modest demand that we have seen in the last few years, there is not enough physical gold even at these levels. The increase in demand that we have seen has most probably been satisfied by central banks leasing or lending their gold to the bullion banks. Central banks supposedly own 30,000 tons of gold but unofficial estimates of their real holdings are at 15,000 tons or less.

So what are the factors that are likely to lead to a major rise in the gold price?

We have for several years outlined in our Newsletters the problems in the world that inevitably will lead to massive money printing and a hyperinflationary depression (see for example “Alea Iacta Est”  and  "There Will Be No Double Dip" on the Matterhorn Asset Management website).

There are three insurmountable problems:

- The budget deficit will increase dramatically due to the problems in the economy and in a few years time the interest on the Federal Debt is likely to be higher than tax revenues.

- None of the problems in the banking industry have been solved but merely swept under the carpet by phoney valuations of toxic debt with the blessing of governments. The circa $20 trillion that were pumped into the world economy to save the financial system in 2008-9 have had a very short term beneficial effect but solved none of the problems.

The effect of this massive $20 trillion infusion has been ephemeral since we are entering the autumn of 2010 with virtually every single economic indicator and statistic in the US deteriorating rapidly. With interest rates already at zero there is no ammunition left but one. And it is this specific last bullet that will be used to infinity in the next few years and starting very soon, namely UNLIMITED MONEY PRINTING. Every single area of the US economy will need support or printed money, whether it is the federal government, the states, the municipalities, banks, pension funds, insurance companies, the unemployed, corporations, health care, housing market, commercial real estate,  individuals, etc, etc, etc. The list is endless and many other countries will follow.

Before we talk about gold in hyperinflationary terms, let’s look at where gold is likely to reach in today’s money.

- The gold peak at $850 in 1980 corresponds to over $7,000 today adjusted for real inflation based on the inflation rate as calculated by John William’s Government Shadow Statistics (shadowstats.com)

The three historical comparisons above (and see chart below) would put gold anywhere from $6,000 to $10,000 and this is without inflation, or more likely hyperinflation.  In a hyperinflationary environment, the price gold will go to is really irrelevant since it depends on how much money is printed. In the Weimar Republic for example gold went to the equivalent of DM 100 trillion (Papiermark). What is more important is that gold is likely to go up at least 5 times from today without inflation and with hyperinflation gold will protect investors against the total destruction of paper money and many other assets. 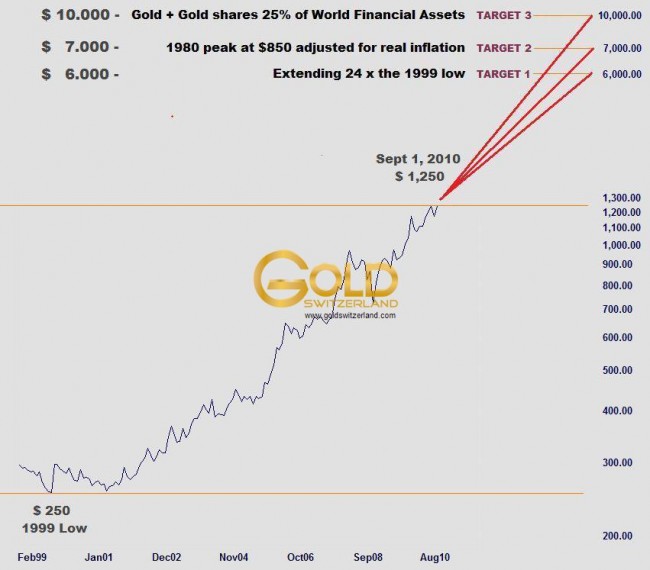 Gold must only be held in its physical form and the holder of gold must have direct access to the gold. We consider ETFs, gold in a bank (whether allocated or unallocated), fractal ownership of physical gold, futures or any other form of paper gold as very risky and a totally unsatisfactory method for owning gold.  Physical gold should preferably be stored outside your country of residence and outside the banking system. The holder must have direct access to the vaults where the gold is stored.

Silver has been lagging gold since its peak at over $21 in 2008. For the last few months the gold/silver ratio has been consolidating between 58 and 71. The ratio is currently around 64 and is likely to start a move down to new lows below the 2006 low at just 44.  So this is very good news for silver which is likely to outpace gold substantially in the next few years.  Silver is probably the most undervalued precious metal today and has great potential.

But there are many caveats for silver:

- It is an extremely volatile metal and is definitively not for the fainthearted.

- We only recommend physical silver owned directly by the investor.

- Physical silver currently weighs 64 times more than gold for the same amount invested and is circa 120 times bulkier (due to its lower density).

- Therefore silver is not as practical as gold as a means of payment.

- Physical silver for investment purposes can be bought/sold and stored tax-free in Switzerland but if the investor takes possession, Vat must be paid.

Due to the above factors investors should carefully consider the split between physical gold and silver.

At the beginning of July this year we sent out a message to investors that, based on our proprietary indicators, we expected stockmarkets to finish the correction up at the end of July and resume the major downtrend in August. We also said that gold would start its major rise in August.  And this is exactly what has happened so far.

We now expect major falls in all stockmarkets worldwide over a sustained period. We would not be surprised to see the Dow down to the 1,000 area (in today’s terms) before this bear market in over. But it will not be a straight line and there will be extreme volatility. When hyperinflation sets in, stockmarkets will have a major but temporary surge.

The only stocks that investors should hold are precious metals stocks and possibly some resource and food stocks. But it must be remembered that stocks do not represent the same degree of wealth preservation as physical precious metals held directly by the investor.

Currencies should in the next few years be looked upon as a necessary evil and not as a store of value.  All currencies will continue to decline against gold, just as they have in the last 11 years and in the last 100 years. Due to money printing by most governments, we will have a fierce game of competitive devaluations by virtually all central banks. We have seen the Euro and the pound weaken substantially and the next currency the speculators will jump on is the US dollar.  The dollar is grossly overvalued, partly due to the weak Euro, and is likely to weaken significantly due to the problems in the US economy.

Currencies only reflect relative value and not absolute value since they can be and are printed until they reach their intrinsic value of zero. It is a fallacy to measure the value of a currency relative to another currency since they are all losing value. Currencies should only be measured against real money which is gold. This is the only method that reveals governments’ deceitful actions in destroying the value of paper money. Therefore it is a mug’s game to speculate or invest in currencies since they will all decline in an extremely volatile and unpredictable market.

So are there currencies which are likely to perform better on a relative basis for funds that have to be held in paper money? We believe that Norwegian kroner, Swiss Franc, Canadian Dollar, Singapore Dollar, Australian Dollar and Renminbi will perform relatively better than many other currencies.

The bond market is the biggest bubble in financial markets worldwide, in our opinion. Investors around the world are worried about the state of financial markets and therefore believe that government bonds represent a safe haven. These investors will receive the most enormous shock on two accounts. Firstly, no government will be able to repay the debts outstanding. So there will either be government defaults, moratoria, or money printing that totally destroys the value of the bonds. Secondly, interest rates are likely to go up significantly to at least 10-15%, totally destroying the value of the bonds.

We are now entering a period when most major asset classes and in particular stocks, bonds and currencies are starting a major decline. Since most financial assets in the world are invested in these three categories plus real estate which will also decline, we are likely to experience major shocks and crises in the financial system and the world economy.  Wealth protection is now more important than probably at any other time in history. Physical gold and possibly other precious metals directly controlled by the investor will be a vital part of a wealth preservation portfolio.