Most people find it very hard to fathom that the current asset deflation is a necessary precursor to hyperinflation. The consequences of the credit and housing bubbles of the last few years have been a financial system which is leveraged to the hilt and with a foundation of quicksand. In order to prop up a sinking financial system just the US government has printed or committed to over $13 trillion and other governments have committed equally substantial amounts. But in spite of these massive amounts of liquidity added to the system, it is not creating inflation but deflation. This is for the simple reason that total financial asset contraction worldwide has been circa $90 trillion at the peak.

So why then are we not going to have continued deflation? As we outlined in our newsletter “The Dark Years Are Here”, the combination of increasing unemployment, escalating government deficits and a financial system still full of toxic debt is a sufficiently lethal mixture for money printing to continue for a very long time.

The consequences of money printing especially in the US and UK will lead to dramatic falls of  the Dollar and the Pound, because nobody is willing to hold a currency of a country which just prints worthless paper in order to finance its excesses.  It is the collapsing currency that leads to hyperinflation not demand pull. So the likely path is first a deflationary recession, which we have now, that due to unlimited money printing leads to a falling currency and this causes a depressionary hyperinflation. This is what we are likely to see in the next few years.

When a currency collapses, the main beneficiary will be the only real money which can’t be printed and which has no debts attached to it, namely GOLD.

In a hyperinflationary environment all bets are off as regards the price target for gold. In the Weimar Republic during the early 1920′s gold went from DM 100 to DM 100 trillion. 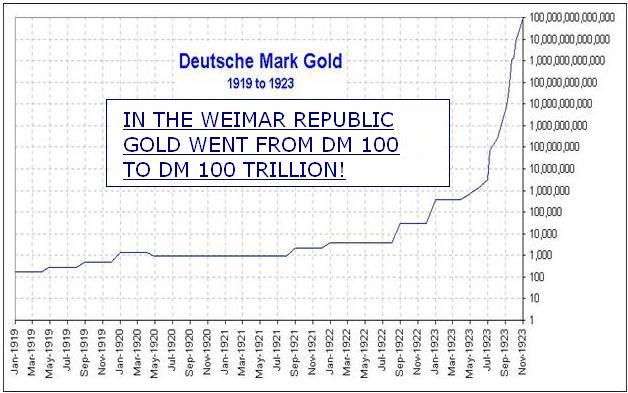 So in a hyperinflationary environment,  virtually the only people who survive with their savings in tact are the holders of gold. This is why gold is the most important means of protecting your wealth.

In spite of the very high likelihood of hyperinflation, most people fear that we will have deflation in the coming years. In order for deflation to prevail, governments would have to stop printing money.  Instead, they would have to slash government spending by 30-50% in order to balance the budget. This would have a disastrous effect on jobs and unemployment would surge. US unemployment is already at 20%, (see The Dark Years Are Here). The effect of the very high unemployment and a massive reduction in government spending will lead to GDP falling by more than 20%. In this scenario very few bank loans will be repaid or serviced. And since the government has stopped money printing they could not save the banks. Thus in this scenario we would most probably  see an implosion of the financial system. Again, physical gold (stored outside the banking system) would virtually be the only way to protect yourself against a deflationary scenario.

We should not compare the current situation to Japan in the 1990′s and the 15 year deflation they have had since. Japan did not have high unemployment, the Japanese people did not have high debts but savings. Most importantly Japanese industry could continue to export their products to the rest of the world. This will not be the case now.  Today, the whole world (and especially the Western World) is suffering from the same disease and no country can or will bail out the US, the UK and many other failing economies.

Optimism is now back in stockmarkets worldwide and many believe that the problems are over. But as we set out in “The Dark Years Are Here” none of the problems that caused the crisis are over. What stockmarkets are experiencing currently is a normal correction in a bear market. In our January Newsletter we forecast that we could see a 50% correction which would take the Dow over 10,000 but it is also possible that the Dow reaches over 11,000 before it turns down again. (These levels are not a forecast, just  technically possible within the bear market). As we said in our May Newsletter, this is a suckers rally and everyone will be sucked in to this euphoria before the market turns down again.

Gold is a win – win situation

Even if stockmarkets go up another 10-20% from here we are still at the beginning of a secular bear market. The severe downturn which the world economy will experience will in our view lead to hyperinflation in the US, the UK and many other countries. This will be very bullish for gold.  But as we have discussed above, in a deflationary scenario, which we believe is unlikely, physical gold will also be essential protection against an implosion of the financial system. Thus both in a deflationary and inflationary scenario gold is essential wealth protection.