Back in April, when we first reported that Deutsche Bank had agreed to settle allegations it had rigged the silver market in exchange for $38 million, we revealed something stunning: "in a curious twist, the settlement letter revealed that the former members of the manipulation cartel have turned on each other", and that Deutsche Bank would provide documents implicating other precious metals riggers. To wit: "In addition to valuable monetary consideration, Deutsche Bank has also agreed to provide cooperation to plaintiffs, including the production of instant messages, and other electronic communications, as part of the settlement. In Plaintiff’s estimation, the cooperation to be provided by Deutsche Bank will substantially assist Plaintiffs in the prosecution of their claims against the non-settling defendants."

Overnight we finally got a glimpse into what this "production" contained, and according to documents filed by the plaintiffs in the class action lawsuit, what Deutsche Bank provided as part of its settlement was nothing short of "smoking gun" proof that UBS Group AG, HSBC Holdings Plc, Bank of Nova Scotia and other firms rigged the silver market. The allegation, as Bloomberg first noted, came in a filing Wednesday in a Manhattan federal court lawsuit filed in 2014 by individuals and entities that bought or sold futures contracts.

In the document records surrendered by Deutsche Bank and presented below, traders and submitters were captured coordinating trades in advance of a daily phone call, manipulating the spot market for silver, conspiring to fix the spread on silver offered to customers and using illegal strategies to rig prices.

“Plaintiffs are now able to plead with direct, ‘smoking gun’ evidence,’ including secret electronic chats involving silver traders and submitters across a number of financial institutions, a multi-year, well-coordinated and wide-ranging conspiracy to rig the prices,” the plaintiffs said in their filing.

The latest evidence is critical because as the plaintiffs add, the new scheme “far surpasses the conspiracy alleged earlier.” As a result, the litigants are seeking permission to file a new complaint with the additional allegations, i.e., demand even more reparations from the defendants who have not yet settled, and perhaps even more evidence of ongoing market rigging. Their proposed complaint broadens the case beyond the four banks initially sued to include claims against units of Barclays Plc, BNP Paribas Fortis SA, Standard Chartered Plc and Bank of America Corp.

The Deutsche Bank documents show, among other things, how two UBS traders communicated directly with two Deutsche Bank traders and discussed ways to rig the market. The traders shared customer order-flow information, improperly triggered customer stop-loss orders, and engaged in practices such as spoofing, all meant to destabilize the price of silver ahead of the fix and result in forced selling or buying. It is also what has led on so many occasions to the infamous previous metals "slam", when out of nowhere billions in notional contracts emerge, usually with the intent to sell, to halt any upside moment in the precious metals.

"UBS was the third-largest market maker in the silver spot market and could directly influence the prices of silver financial instruments based on the sheer volume of silver it traded," the plaintiffs allege. "Conspiring with other large market makers, like Deutsche Bank and HSBC, only increased UBS’s ability to influence the market."

Some examples of the chats quoted are shown below. In the first example a chart between DB and HSBC traders in which one HSBC trader says "really wanna sel sil[ver" to which the other trader says "Let's go and smash it together."

Another chat transcript from May 11, 2011 reveals a Deutsche Bank trader telling a UBS trader that the cartel "WERE THE SILVER MARKET"(sic) based on feedback from outside traders to which UBS replies, referring to the silver market "we smashed it good", leading to the following lament "fking hell UBS now u make me regret not joining." 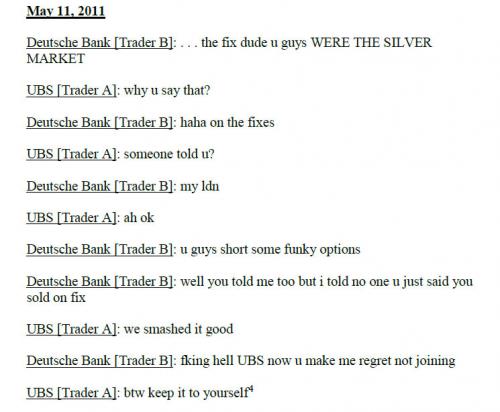 Finally, for all those traders who wonder what happened to their stops as a result of dramatic moves in the price, here is the answer: a June 2011 chat between a UBS and a DB trader comes down to the following: "if you have stops... who ya gonna call... STOP BUSTERS" 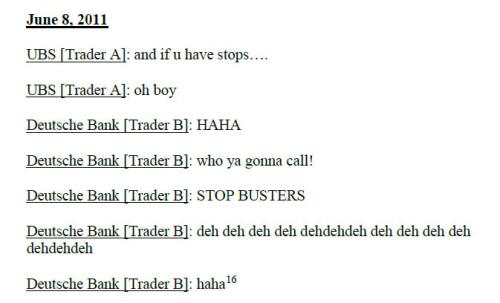 If the plaintiff request for an expanded lawsuit is granted, we expect many more fireworks as other banks rush to settle on their own and provide even more documentary proof of unprecedented precious metal market manipulation, until there is just one bank left standing, ostensibly the one slammed with the biggest fine of all, perhaps even leading to prison time for some of the market riggers.