There had been an eerie silence at the COMEX in recent weeks, where after registered gold tumbled to a record 120K ounces in early December nothing much had changed, an in fact the total amount of physical deliverable aka "registered" gold, had stayed practically unchanged at 275K ounces all throughout January.

Until today, when in the latest update from the COMEX vault, we learn that a whopping 201,345 ounces of Registered gold had been de-warranted at the owner's request, and shifted into the Eligible category, reducing the total mount of COMEX Registered gold by 73%, from 275K to just 74K overnight. 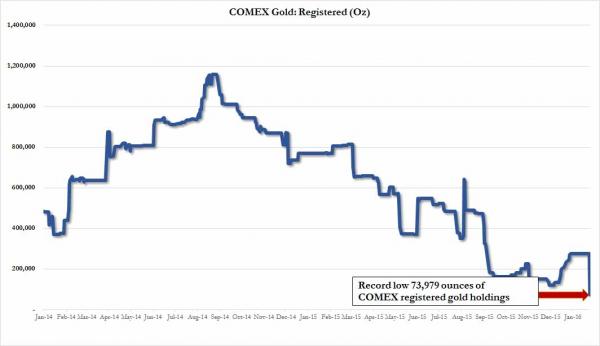 This took place as a result of adjustments at vaults belonging to Scotia Mocatta (-95K ounces), HSBC (-85K ounces), and Brink's (-21K ounces). 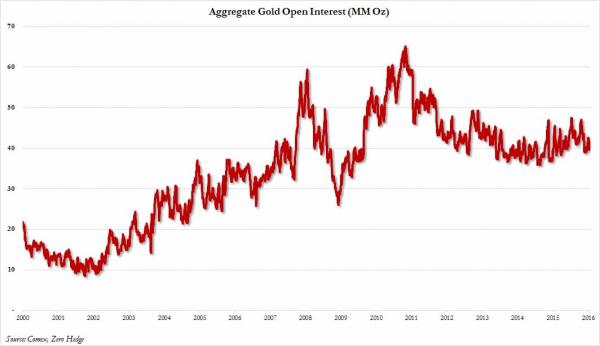 This means that the ratio which we have been carefully tracking since August 2015 when it first blew out, namely the "coverage ratio" that shows the total number of gold claims relative to the physical gold that "backs" such potential delivery requests, - or simply said  physical-to-paper gold dilution - just exploded.

As the chart below shows - which is disturbing without any further context - the 40 million ounces of gold open interest and the record low 74 thousand ounces of registered gold imply that as of Monday's close there was a whopping 542 ounces in potential paper claims to every ounces of physical gold. Call it a 0.2% dilution factor. 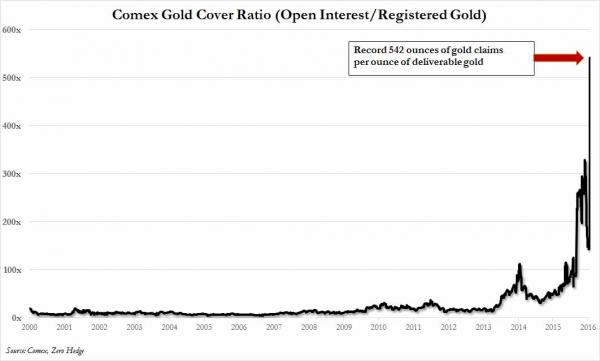 To be sure, skeptics have suggested that depending on how one reads the delivery contract, the COMEX can simply yank from the pool of eligible gold and use it to satisfy delivery requests despite the explicit permission (or lack thereof) of the gold's owner.

Still, the reality that there are just two tons of gold to satisfy delivery requsts based on accepted protocols should in itself be troubling, ignoring the latent question why so many owners of physical gold are de-warranting their holdings.

Considering there are now less than 74,000 ounces of Registered gold at the COMEX, or just over 2 tonnes, we may be about to find out how right, or wrong, the skeptics are, because at this rate the combined Registered vault gold could be depleted as soon as the next delivery request is satisfied. Or isn't.