Something Just Snapped At The Comex

Update: Earlier today, we said that we would "keep a close eye on today's Comex update to see if JPM reverses this "adjustment" and adds at least a few more tons of deliverable gold to its vault." Moments ago we got the daily update form the Comex and not only did JPM not reverse its registered to eligible adjustment, but more curiously, the second largest vault, that of Scotia Mocatta (behind only HSBC) saw a comparable adjustment, whereby 16,644 ounces of gold, or about half a ton, and 14% of its vault total, were adjusted away from "registered" and into the "eliglble" category.

This means that the already record low total registered holding across the Comex system, declined once again this time by 8.3% and hit a new all time low of 185,315, or less than 6 tons. 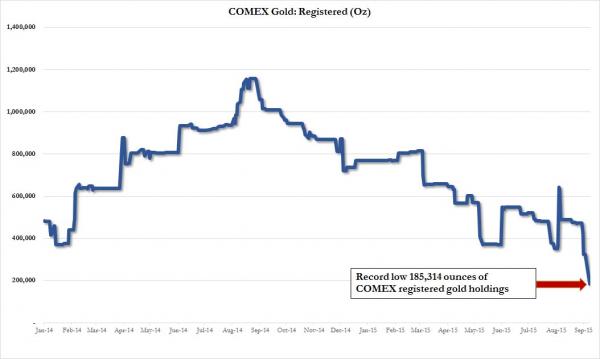 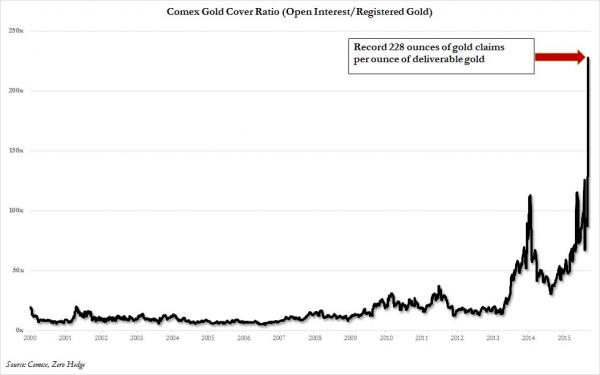 For those who missed the full story from earlier today, please read on.

Just over one month ago, when looking at the latest changes in registered gold held at the Comex ,we were stunned not only by the collapse in this series to a record low of just over 350k ounces or barely over 10 tons, but also by the surge in "gold coverage", or the amount of paper gold claims on physical gold, which exploded to a record high 124 per ounce.

This is what we said on August 3:

While on its own, gold open interest - which merely represents the total potential claims on gold if exercised - is hardly exciting, as we have shown previously it has to be observed in conjunction with the physical gold that "backs" such potential delivery requests, also known as the "coverage ratio" of deliverable gold.

It is here that things get a little out of hand, because as the chart below shows, all else equal, the 43.5 million ounces of gold open interest and the record low 351,519 ounces of registered gold imply that as of Friday's close there was a whopping 123.8 ounces in potential paper claims to every ounces of physical gold.

This is an all time record high, and surpasses the previous period record seen in January 2014 following the JPM gold vault liquidation.

Another way of stating this unprecedented ratio is that the dilution ratio between physical gold and paper gold has hit a record low 0.8%. Indicatively, the average paper-to-physical coverage ratio since January 1, 2000 is a "modest" 19.1x. As of Friday it had soared to more than 6 times greater.

One month ago we showed this record surge in gold claims as follows: 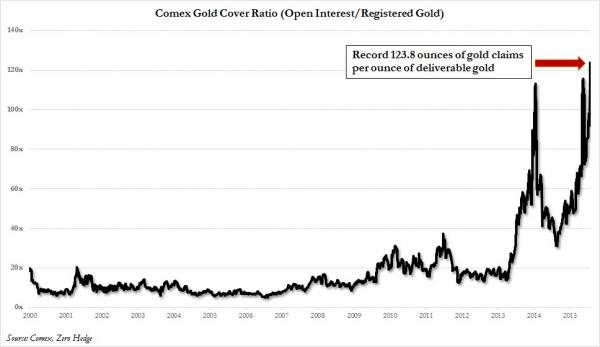 But if last month was shocking, then what the COMEX revealed yesterday was absolutely jaw-dropping.

Here is the most recent update provided by the CME on eligible and registered gold. 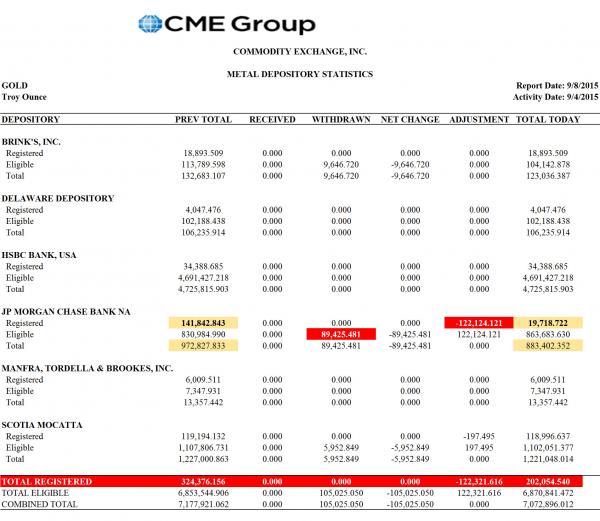 What it reveals is that while JPM saw another 90,000 ounces of gold once again withdrawn from its vault, this time in the eligible category, for some reason a whopping 121,124 ounces of registered gold were reclassified as eligible. In doing so, JPM's registered gold (red line in chart below) tumbled to a record low of just 19,718 ounces - an 86% collapse in just one day -  and well under 1 ton of gold, some 600 kilos of physical gold available to meet delivery requests to be specific! 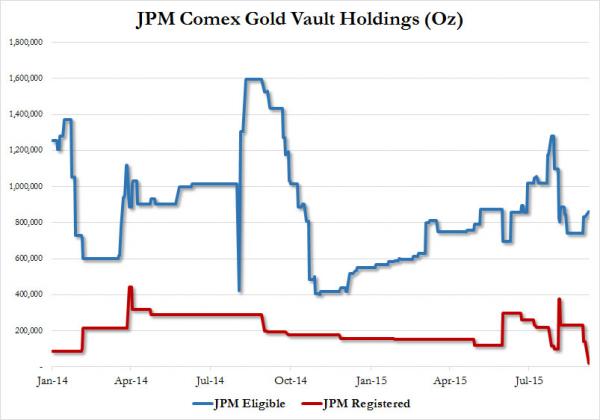 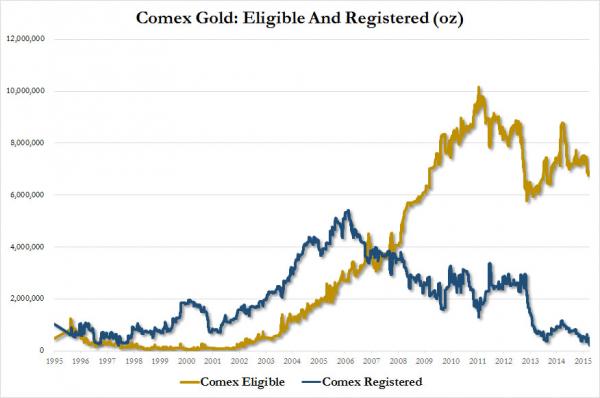 Zooming in only on the registered gold since 2014: 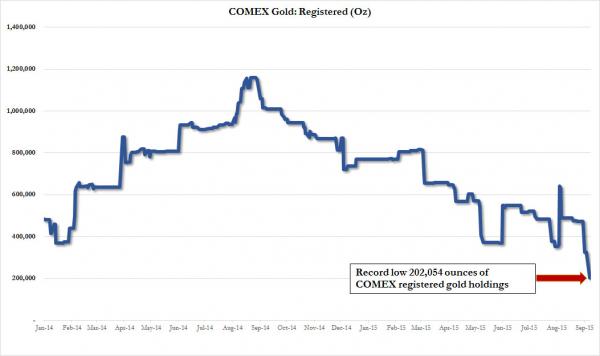 Not surprisingly, the latest collapse in registered gold took place while the gold open interest remained flat, and in fact has been modestly rising in the past year as seen below: 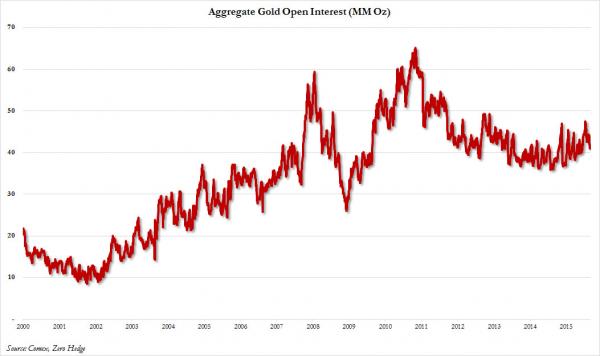 Which brings us to the punchline chart: the Comex gold "coverage" ratio, or the amount of paper claims for every ounce of physical. As of Friday this number was literally off the chart (it would not have fit on the previous chart shown up top), soaring to a mindblowing 207 ounces of paper gold claims for every ounce of deliverable gold. This also means that the dilution ratio between physical gold and paper gold has hit a new all-time low of just 0.48%! 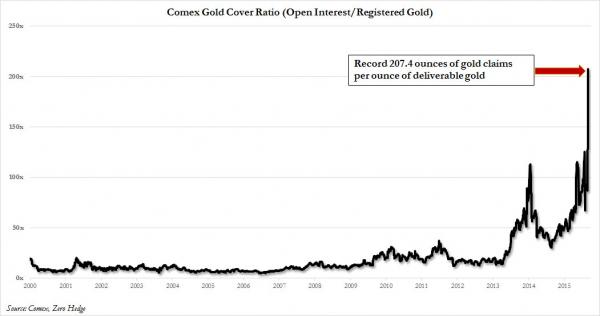 And while we know what caused this epic surge in potential claims on gold - namely the relentless outflow in registered gold - what we don't know is whether this is a systemic event, one which threatens the next Comex gold delivery request with an "insufficient product" response, and a potential default, or simply a one day abnormality.

What we do know is that, if only for one day, something at the Comex has snapped.

We will keep a close eye on today's Comex update to see if JPM reverses this "adjustment" and adds at least a few more tons of deliverable gold to its vault, and if not, perhaps a phone call or two may be in order.