To ride a bull market is like climbing a wall of worry. Most of the time the market seems to be consolidating or correcting. The bull market in gold fits that picture perfectly. It started in 1999 at $250 but very few got in at the very bottom. We entered the market in 2002 at $300 with a very strong belief that the world economy and financial system would have unsolvable problems. Since then we have seen a very strong bull market interrupted by totally normal corrections. Admittedly, since the 2011-12 top, we have had a long wait but the uptrend resumed at the end of 2015, albeit somewhat slowly so far. The same happened in the early 2000s. Gold bottomed in 1999 but only took off in 2002.

Most investors enter a market after a big rise and then often sit through a major part of the correction before they bail out. The best time to enter is when an investment is unloved and undervalued but few have the courage to do that. Instead they wait until the media start talking about it. We are fortunate to have investors who understand the role of gold from a wealth preservation perspective. These are investors who don’t see gold as an investment but as insurance and as protection against governments’ folly and total mismanagement of the economy and financial system. Governments hate gold because it reveals their deceitful actions. No government ever tells the people that as a result of their actions, the value of paper money always goes to zero. Since 1913 for example, the dollar has lost a staggering 98% of it purchasing power. And since 1999, the dollar is down 81% in real terms, measured in gold. 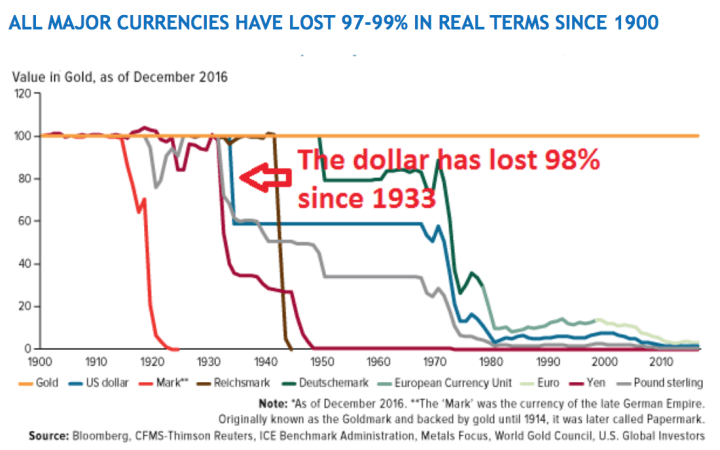 We will very soon, and most probably in 2017, start the final phase of the dollar destruction when the value of the dollar reaches zero. This sounds dramatic but we must remember that something that has already gone down 98% is guaranteed to finish the move by reaching a total loss of 100%. So all we have left now is the final 2% move for the dollar to reach its intrinsic value of ZERO! The only problem is that the final 2% loss, measured from today, means that the dollar will go down another 100% from here. This is likely to happen within the next 4-5 years. But it could go very fast once it starts. The $2 quadrillion of global debt, derivatives and liabilities could implode very quickly with governments futile attempts to rescue the system having no effect this time. After all, by printing or creating electronically quadrillions of dollars, all governments will do is to waste paper and electricity. Finally, the world will discover that the last 100 years were based on an illusion that paper money and electronic money actually have a value. But how can money or credit which is created without any production of goods or services ever have more than zero value. For over a century, governments and central banks have led the people to believe that real wealth has been created when most of it is based on illusions and lies. The speed at which the global financial house of cards collapses will prove that it was built on foundations of quicksand.

Since the creation of the Fed, 100 years ago, governments and bankers have practiced financial repression, which includes manipulation of markets, interest rates and unlimited credit expansion and money printing.

When the gold backing of the dollar ceased in 1971, the process accelerated and we are now in the final stages of history’s greatest Ponzi scheme ever. Because this time it will end badly. The exponential growth of debt and risk between 1971 and 2006 led to a bankrupt financial system that should have gone under 2007-8. But the bankrupt banks told their central banker puppets to issue package of $25 trillion in credit, printing and guarantees. This temporarily postponed the inevitable eventual collapse of the financial system. It also had a built-in benefit of massive increases in earnings and capital for bankers and the wealthy. 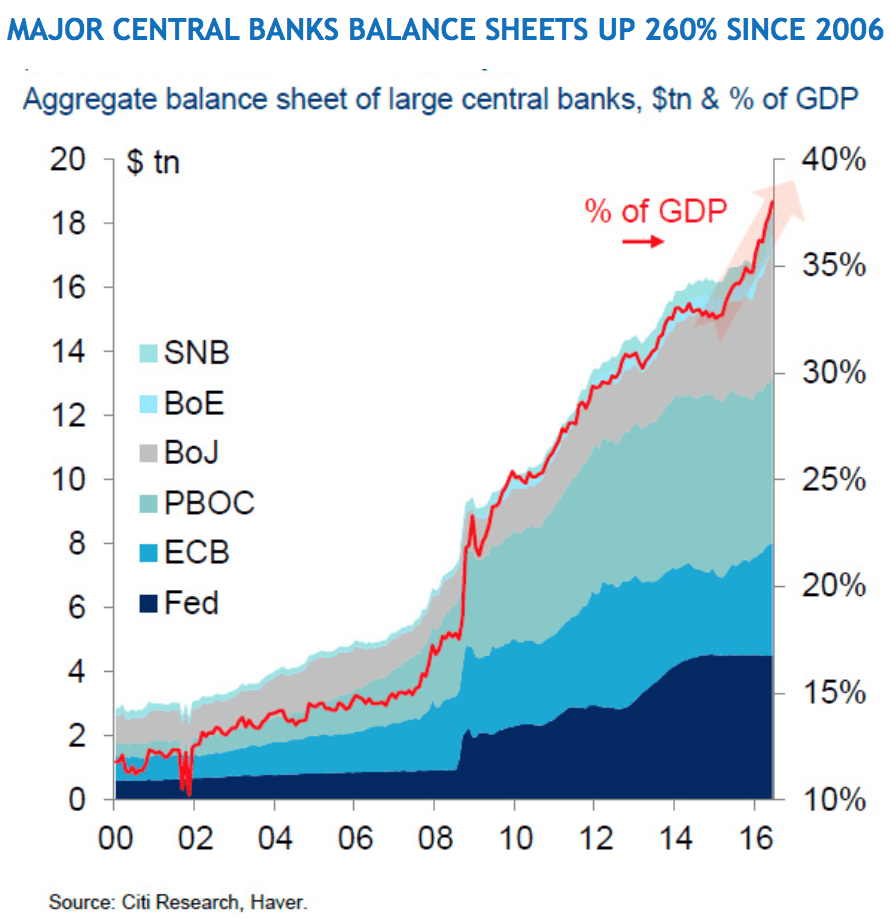 Global debt has grown by about 70% or $100 trillion since 2006 and that doesn’t include derivatives or unfunded liabilities.

All the elements are now in position for the flood to start. Ten years have passed since the last crisis which was just a rehearsal before the final collapse. Stock markets are at historical overvaluations, bond market interest rates are at 5,000 year lows and the dollar is a currency which has zero value only backed by debt and weapons. But the supernova debt bubble will still probably expand before it implodes. That is only because central banks will, in a final desperate attempt to rescue the world, print quadrillions of dollars. Thereafter all the debt and all the assets financed by the debt will disappear into a black hole.

It seems unlikely that central banks can keep all the black swans flying in 2017. The pressures on the financial system are just too great. The beginning will be innocuous like a sharp fall of the dollar or the stock market. Initially that will reverse the expected policy of the Fed tightening. Instead for a brief period, US rates will come down. But as the dollar and stock market falls accelerate, the Fed’s lowering of rates will be seen as a sign of weakness. That will lead to long rates going up as investors start selling all debt instruments, both government and corporate. Soon investors will realise that governments will never repay their debts, nor will consumers, students, car buyers or home owners. During the coming crisis, everyone will understand the meaning of junk bonds. Because all bonds will be junk. They will have zero value and only serve as decoration of the walls in your loo (toilet). The words Debt and Mortgage are linked to the word death and what the world will experience in the next few years is the death of the debt markets which also will mean the death knell of the financial system.

Irrefutable reasons for gold to rise

So what will all of this mean for the price of gold. Firstly, let’s be clear that the current price of gold has nothing to do with a free market price. Many people believe that gold goes up as a result of events, like war, bombs or terrorist attacks. Such events only have a short-term effect on the gold price. Since gold is money with constant purchasing power, its price in fiat or paper money is primarily a reflection of the change of value of the paper money. If paper money is debased due to money printing or credit extension, the gold price measured in dollars or euro will increase. Thus, gold as a rule doesn’t go up in price but the value of paper money goes down.

Let us look at some of the factors that will push the gold price to unthinkable levels measured in paper money in the next few years: 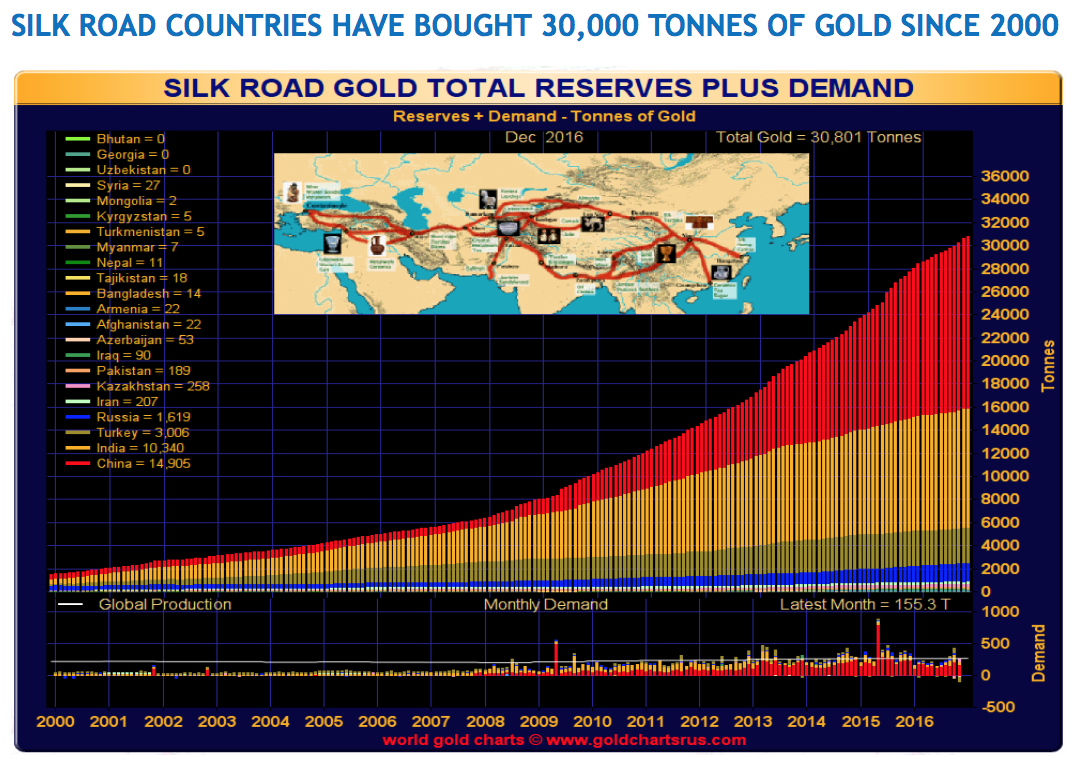 Whilst the West has very little understanding of the effects of their disastrous policies, the East knows exactly what will happen. This is why the East continues to buy all the gold they can get hold of to protect against a bankrupt financial system created by central banks.

The gold price will soon reflect the debasement of currencies

There are many methods that can be applied to calculate what the future fold price. Whether we take say 40% or 100% gold backing of the US or global monetary base or inflation adjusted gold price or another measure, we would arrive at a figure of $10,000 or higher at today’s monetary base or inflation figures. But when global panic sets in and the financial system collapses, all these calculations can be thrown out of the window. In a panic scenario, fuelled by hyperinflation, gold will reach levels which are unthinkable today, whether that means $100k, $100 billion or $100 trillion. The absolute number will be meaningless since it is measured in worthless paper money. What is certain is that gold will appreciate substantially more than its current purchasing power value.

So what will governments do when this happens? Will they confiscate gold? In my view, it is unlikely that they will confiscate the only money that people can use when paper money and most of the financial system have died. They will probably try to tax gold and all other assets of the rich. But if it gets as bad as I am outlining here, there will be very few functioning tax departments.

I do realise that the scenario that I am describing will be ridiculed by many people. I obviously hope myself that it will never happen. But what I do know is that the risk today is greater than any time in the history of the world. It could of course take longer to materialise and the outcome might be somewhat different. But with risk at unprecedented levels, wealth preservation must be a priority. There is no better financial protection than physical gold and silver, safely stored.