First it was Germany who redeemed 120 tons of physical gold in 2014; then it was the Netherlands who "secretly" redomiciled 122 tons of gold; then this past May, we learned that Austria would be the third "core" European nation to repatriate most of its offshore gold, held primarily in the Bank of England, redepositing it in Vienna and Switzerland.

Thanks to the latest NY Fed data released yesterday, we now know that beginning in 2014 and continuing through yesterday, the gold "bleeding" from the vault located 90 feet below street level at 33 Liberty Street (and which may or may not be connected by a tunnel to the JPM gold vault located just across the street at 1 Chase Manhattan Plaza) is not only continuing but accelerating.

As the chart below shows, while central banks assure the population that there is nothing to worry about when it comes to paper money, they have been quietly pulling gold from the biggest centralized depository of global gold in the world: the New York Federal Reserve. 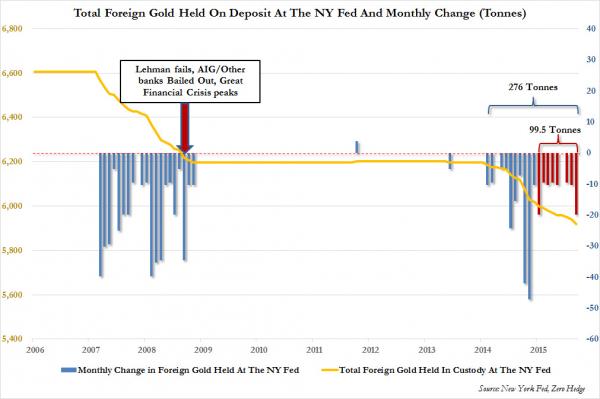 According to the latest just released monthly update of foreign official assets held in custody at the NY Fed, in July the total holdings of foreign earmarked, i.e., physical, gold declined to just over $8 billion when evaluated at the legacy "price" of $42.22 per ounce. In ton terms, this means that after declining below 6000 tons in January, for the first time since FDR's infamous gold confiscation spree... 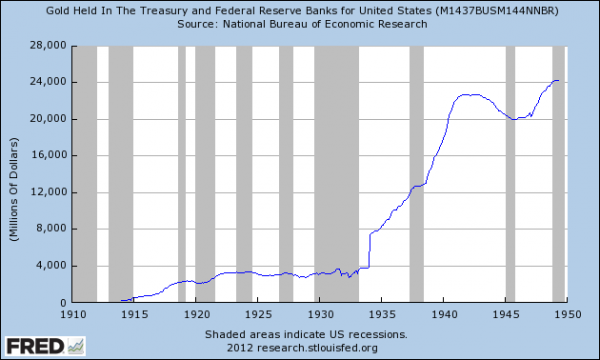 This was a doubling in gold withdrawals from 10 tons in August, and
is the highest withdrawal since January.

At just under 5,920 total tons in NY Fed inventory, this is the lowest amount of gold held in NY Fed custody in decades, and is the 20th consecutive month of flat or declining gold, and when added to previous outflows, amounts to 199 tons of gold withdrawn in the past 12 months, and a whopping 276 tons pulled since the start of 2014.

Indicatively, during the last crisis period, starting in March 2007 and lasting through November 2008, foreign central banks withdrew gold for a total of 20 out of 21 consecutive months, repatriating a grand total of 409 tons of gold. The last period of peak redemption culminated with the failure of Lehman in September 2008, the near failure of AIG in October and November 2008, coupled with the Fed's bailout of the western financial system.

If past is prologue, one should ask: what current or future event is driving the ongoing redemption of gold from the NY Fed this time?