The general public doesn’t like hearing what some of us who are Cassandras have to say. Because our message does not fit in with the choir of propaganda and lies. We are predicting a future for the world which is unpleasant for most people and therefore few believe our predictions. It is part of human nature to believe that the current state of affairs will go on forever. And that is the case whether times are good or bad. In bad times, everyone believes that it will never end. I remember vividly the 1970s in the UK when it felt like the severe recession was going to be permanent. It is the same now; conventional wisdom says that the economy will continue to grow at a steady pace and so will assets such as stocks and property. Very few realise that the growth we have seen in the last few decades is totally false and based on credit and printed money.

Cassandra was the daughter of the king of Troy in Greek mythology. The god Apollo gave Cassandra the power of prophecy but when she resisted his approaches, Apollo inflicted a curse that no one would ever believe her prophies although they were all accurate. And this is exactly what is happening to Cassandras or soothsayers today. Many of us are totally clear about the consequences of the total mismanagement of the economy during the last 100 years. Gradually the situation has deteriorated to a point when there is no solution. Instead, at some point in the next few years the debt and asset bubbles will implode with dire consequences for the global economy and for most people on the planet. But just like with Cassandra, nobody believes what we are saying when we are predicting the likely outcome of the most massive, government led, global Ponzi scheme in history.

Don’t get me wrong, we were not knowingly given prophetic powers by Apollo or any other god. But a few of us are absolutely convinced that you cannot build prosperity on a lie, on printed money or by breaking laws of nature that have stood the test of time. We now live in a world where lies have become the truth.

“The very concept of objective truth is fading out of the world. Lies will pass into history.”

FROM PONZI TO SHANGRI-LA

In order to run a successful Ponzi scheme, participants must be made to believe that they are all winners. Human beings’ inherent greed prevents them from seeing that a Ponzi scheme eventually runs out of money since it will require a few billion creatures from another planet for everyone to get their pay-out. In a modern economy, unlimited amounts of money can of course be printed or created electronically. And this governments will do in a final and desperate attempt to save the world. But just like with a Ponzi scheme, all this manufactured money will have zero value. Otherwise, why don’t we just print unlimited amounts of money and stop working and stop all production. This would be the perfect Shangri-La world with nobody working and everyone living in total affluence. But sadly, it is not that easy.

Governments’ money forging scheme which has lasted a century is now coming to an end. The value of all major currencies in the world has declined 97-99% in the last 100 years. In the next few years we will see money printing of a scale that make all these currencies worthless by declining the final 1-3%. Though, what we must remember is that this final move involves a 100% decline in value from today.

Because even if Orwell is correct that lies are the new truth today, fortunately the truth will always win over time.

“The truth is incontrovertible. Malice may attack it, ignorance may deride it, but in the end, there it is.”

Since 2006, global debt has grown exponentially and is now around $250 trillion. This is all driven by the main central banks in their attempt to prevent the financial system from collapsing. The three major central banks’ balance sheets have all expanded rapidly during the same period. They have all taken turns in the race to become the most profligate money printer. For a few years the Fed was in the lead but since 2015, the BoJ and ECB have caught up quickly. All three have now printed around $4.5 trillion each, having grown from below $1 trillion at the beginning of this century. The seesawing is likely to continue and sometime during the next 12-18 months, the Fed will start accelerating the US money printing again by adding many trillion dollars or even tens of trillions to their balance sheet. 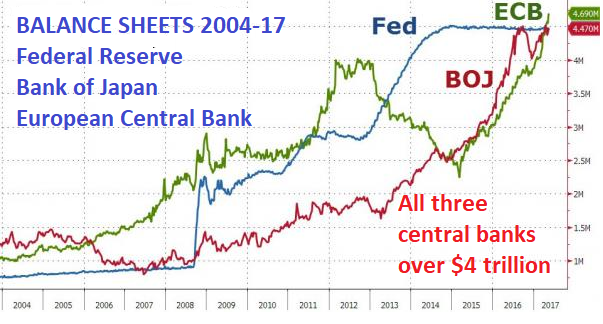 By manipulating markets and creating infinite liquidity, central banks are not just temporarily putting off the demise of the financial system. They are also creating a false prosperity by fuelling global stock market rises to new highs. No one should be under the illusion that all is well on Stock Street and that the new highs we are seeing in many markets around the world is based on real growth. This rise is primarily liquidity driven, leading to over valuations and p/e ratios not seen since the 2000 stock market bubble.

The graph below shows the perfect correlation between money printing and stocks. In March 2009, the combined balance sheet of the Fed, BoJ and ECB was $5.8 trillion whilst the S&P index was at 700. Since then, the three central banks’ balance sheets are up 2.3 times to $13.6 trillion and the S&P is up 3.5 times to 2,400. So this is where the world is today. For stock prices to grow, money must be printed, for GDP to grow by one dollar, credit must be expanded by several dollars. At the same time, billions of paper gold must be created and sold to keep the gold price down. Because a high and true price of gold would be a sign of economic mismanagement and must therefore be prevented at any cost. Thus, we are really living a lie. Cassandra would have seen this and warned the world but no one would have listened. And for the Cassandras of today it is the same. Very few want to hear what we have to say and most people think we are mad, just like Cassandra. 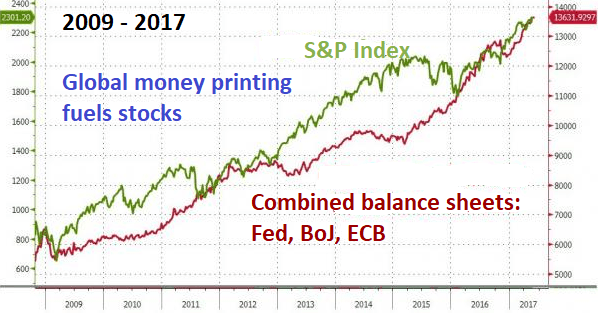 HOUSEHOLD, AUTO AND STUDENT LOANS – THE NEXT DISASTER

Until the truth is revealed, debt will continue to expand but not only the Fed’s balance sheet. US National debt is $ 20 trillion and will at least double in the next 8 years like it has every 8 years since 1980. In addition, more and more US sectors are joining the $1 trillion debt club. Currently it has the following members; Unsecured households, Auto loans and Student debts. Outstanding debt for each one of these categories exceeds $1 trillion and growing. But not only are the debts growing but so are bad debts. Eventually most of these debts will become bad debts with no chance of ever being repaid. Also, US corporate debt is growing and is up $8 trillion since 2010.

But it is not only US debt growing as we are seeing the same trends in Europe, Asia, Canada, Australia and Emerging Markets. What the world is now experiencing is the last hurrah of a global debt bonanza.

In addition to debt, pensions or the lack of them will be a massive problem for world population. Aging populations in many countries like Japan, China and Europe will lead to human misery. In the US 10,000 people reach 65 every day! Very few of these will have enough pension savings to live on for the rest of their lives especially when the recession/depression hits.

Short term, US unemployment is pointing to a less buoyant economy than the Fed had planned for. The latest unemployment figures are making another two rate hikes in 2017 very unlikely. The real figures are of course a lot worse than the published ones since the Bureau of Labor Statistics invents a few hundred thousand jobs every month.

As I discussed in my article  two weeks ago “Gold’s days of glory beginning as Dollars are ending”, the dollar turned down in December and is now starting a major long-term fall against most currencies. But it won’t be in a straight line since the currency race to the bottom will see much seesaw action.

More importantly, the weaker dollar is a signal that gold is now resuming the long-term bull market. The next pause could be $1,360. We might not see gold going through that level until the autumn, but once it does the rise will be very rapid.

From a wealth preservation point of view, there are two major factors to consider:

1. Global risk has never been higher in history. And this pertains to economic, financial, geopolitical and cyber risks. Investors must not believe the lies and propaganda they are being fed. All is certainly not well in the state of the world. No, everything is very, very rotten! (to paraphrase Shakespeare’s Hamlet).

2. Physical gold offers the best wealth protection and insurance against the rotten state of the world. Like all insurance policies, gold must be owned and safely stored before the catastrophe happens. At $1,280 per ounce, it is the cheapest insurance premium that anyone will ever pay against the risk of the total destruction of assets and currencies.