Earlier today when we reported the stunning news that DB has decided to "turn" against the precious metals manipulation cartel by first settling a long-running silver price fixing lawsuit which in addition to "valuable monetary consideration" said it would expose the other banks' rigging having also "agreed to provide cooperation to plaintiffs, including the production of instant messages, and other electronic communications, as part of the settlement" we said "since this is just one of many lawsuits filed over the past two years in Manhattan federal court in which investors accused banks of conspiring to rig rates or prices in financial and commodities markets, we expect that now that DB has "turned" that much more curious information about precious metals rigging will emerge, and will confirm what the "bugs" had said all along: that the precious metals market has been rigged all along."

This was confirmed moments ago when Reuters reported that Deutsche Bank has also reached a settlement in US litigation alleging the bank conspired to fix gold prices. In other words, hours after admitting it was rigging the silver market, it did the same for gold.

Some more headlines from Reuters:

Most importantly, as the actual settlement reveals, Deutsche has agreed that in addition to once again providing "valuable monetary consideration" which will be paid into a settlement fund, that like in the silver settlement it will provide "cooperation in pursuing claims against the remaining Defendants."

And with that the floodgates open.

Here is the full settlement letter: 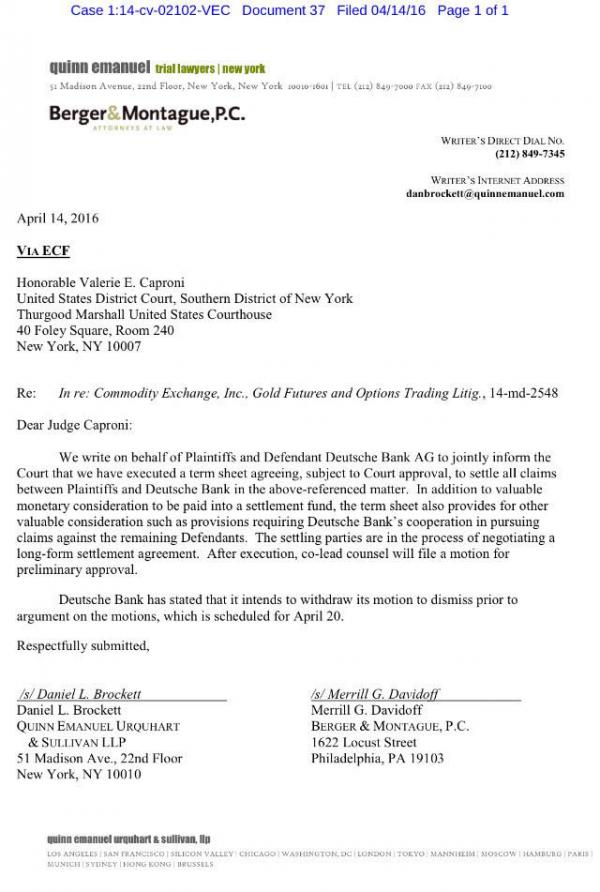