Both Western and Eastern central banks are now fully supporting gold. Precious metals investors can with total confidence buy and hold physical gold, silver and platinum in the firm knowledge that central banks both in the West and the East will by their actions guarantee that the price can only go up. But the support from West and East is very different. Western central banks have not been friendly to gold for decades as they have significantly reduced their holdings.

As the chart below shows, central banks’ total gold holdings went from a peak of 38,000 tonnes in the early 1960s to 30,000 tonnes in 2006. The sellers were almost exclusively Western banks. 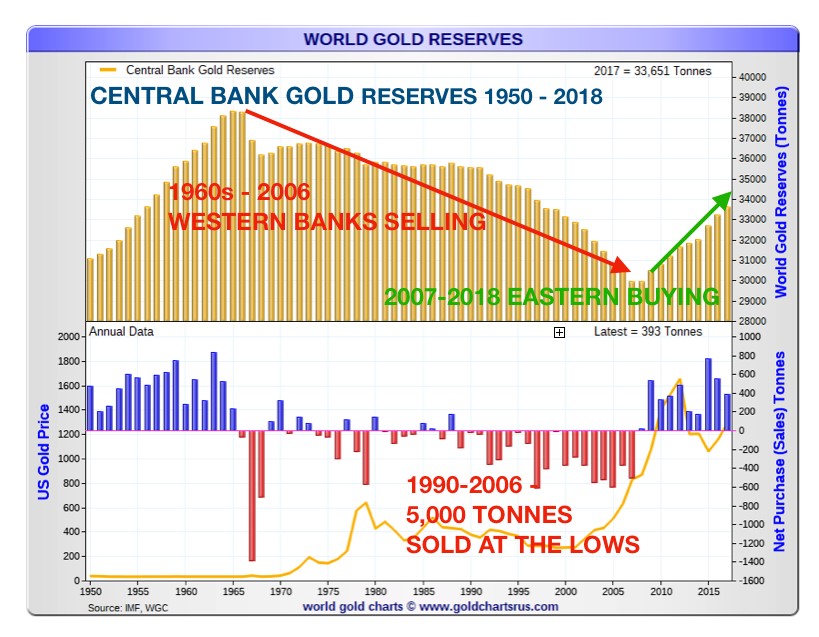 What the chart above also shows is that the central banks were selling into a falling market and in fact causing the rapid drop in the gold price. Both the Bank of England and the Swiss National Bank sold most of their gold at the very lows. So much for Western Central Banks understanding gold!

MONEY PRINTING IS SUPPORTIVE FOR GOLD

So how can Western banks be seen as supportive of gold when they sold for 40 years? For two reasons. Firstly they ceased selling physical gold in the late 1990s and early 2000s and are thus no longer pushing the price of gold down overtly. But they are of course actively selling gold in the paper market.

Secondly and more importantly, they have through their irresponsible actions of money printing and credit expansion created the perfect backdrop for an accelerating currency debasement in the next 5-7 years which will continue to make gold more valuable in fiat money.

Debt has grown exponentially since Nixon’s fatal decision to end the gold backing of the dollar and the currency system in 1971. The chart below shows how debt is now reaching intolerable levels. Just in this century, debt has trebled from $80 trillion to $250 trillion today. Since 2006 when the financial crisis started, debt has doubled. 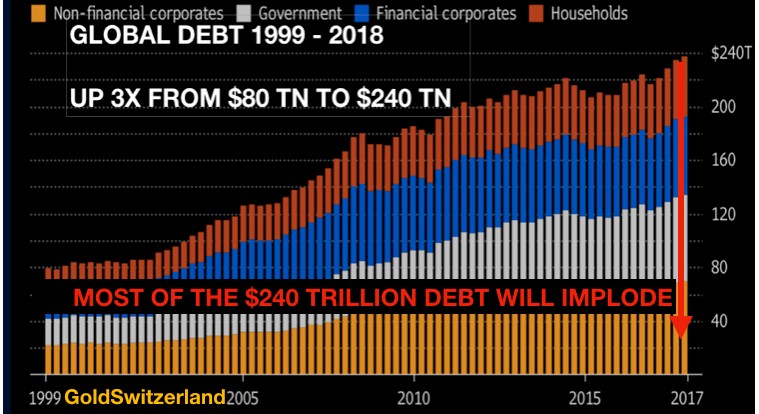 With manipulated interest rates from negative to just a few percentage points in most countries, the interest burden is already more than most nations can afford. The 35 year interest cycle turned up in 2015 and we are now likely to reach at least the 15-16% as in the late 1970s and early 1980s. 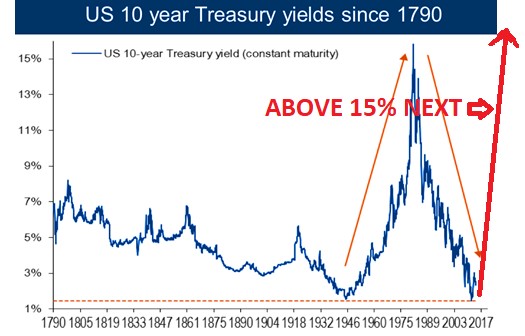 Let’s assume that debt will “only” double between today and 2030. Probably much too conservative with the problems that the world will encounter in the next decade. Nevertheless, a doubling would mean global debt of $500 trillion by the late 2020s.Half a quadrillion debt is a figure that virtually nobody can fathom today. But let us assume that interest rates go to 15% “only” by that time. That would mean a global interest bill of $75 trillion! If we relate that to current global GDP of $80 trillion, it means that the future interest cost would almost be equal to today’s global production of goods and services.

It is likely that global GDP will have increased by then but an implosion of the world economy could easily reduce GDP by 30-50%. The biggest reason for GDP to increase in nominal terms would be hyperinflation. But hyperinflation normally only lasts a few years and thereafter an implosion of the economy follows. We can speculate about these figures, but nobody will be able to forecast the exact course of events. What is very clear though is that the world will not be in a position to finance the enormous debts that it will face in the next ten years.

The consequences will be unlimited money printing leading to the final destruction of paper money since the creation of the Fed in 1913. Remember that all major currencies are already down 97-99% against gold in the last 100 years. The remaining fall of 1-3% will take place within the next 10 years and probably within the next 5-7 years. But what is important to understand is that 1-3% measured from 1913 is 100% from today which means that currencies will go to ZERO.

A TOTAL CATASTROPHE OF THE CURRENCY SYSTEM

So there we have it, “a final and total catastrophe of the currency system”. This is what we the world will experience in coming years. Nobody must believe that it is different today and that central banks won’t let it happen. On the contrary, it is central banks that have created this situation and will guarantee that it will happen. This is nothing new in history, all “paper money eventually returns to its intrinsic value of ZERO” as Voltaire said in 1729.

For example in 180 to 280 AD, the silver Denarius went from almost 100% silver content to 0%. This is how the Romans printed money. So it is a major mistake to believe that it will not happen this time after the biggest global credit expansion in history.

The consequence will be that all currencies will become virtually worthless just like in Venezuela today. And gold will shine like it always has by maintaining purchasing power as the currencies become totally debased. Because of the severity of the coming crisis, gold and the other precious metals are likely do a lot better than just maintaining purchasing power. Venezuela, an oil rich and once prosperous country, has collapsed economically, politically and morally under the socialist regime. Around 80% of the people don’t get enough food and both crime and disease are rampant.

So the above explains how Western Central Banks will underwrite the gold price also in coming years. And the East, which has understood the consequences of foolish Western policies for quite some time, continue to buy quantities which almost equal the annual mine production of gold. As the Chart shows below, China has bought 17,000 tonnes of gold since 2008. China’s purchases have accelerated since 2013. In the six years between 2013 and 2018 China bought 13,000 tonnes which is virtually total global mine production excluding China’s own. 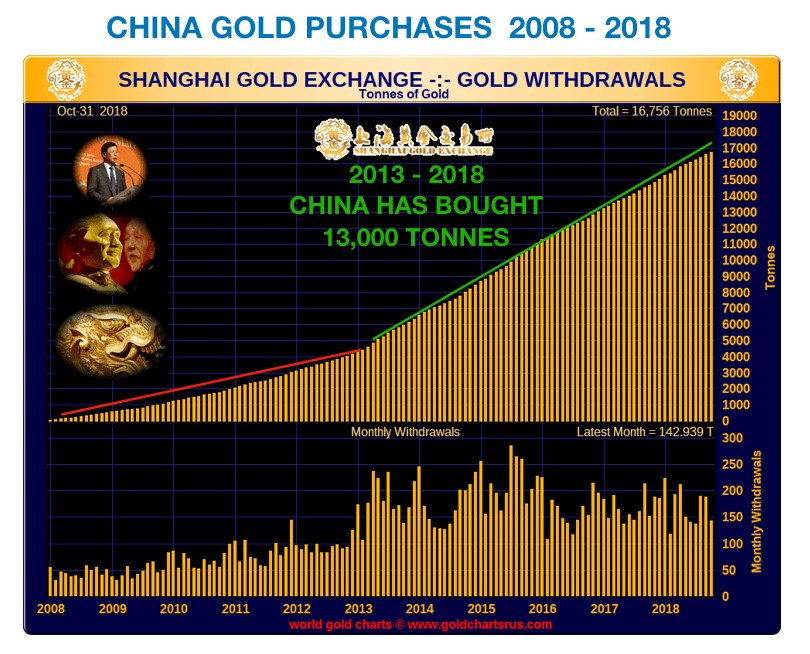 Western central banks are clearly still reducing their physical gold holdings. We see regular high exports coming out of the UK. There are no gold mines of any significance in the UK. So the exports are clearly central bank gold held in London which is either leased to the market or sold covertly. This gold is bought by primarily China and India who ship the 400 oz bars to Switzerland to be broken down to 1 kg bars for onward export to the East. The chart below show that the UK exported 88 tonnes to Switzerland in October and the US 32 tonnes. 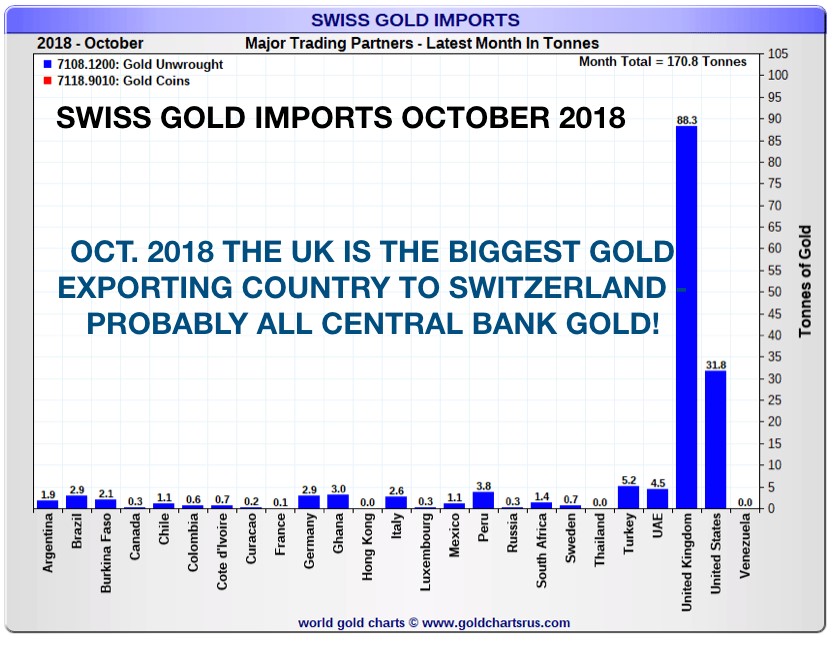 In 2017 Switzerland bought more gold from the UK than any other country and this must be mostly central bank gold. 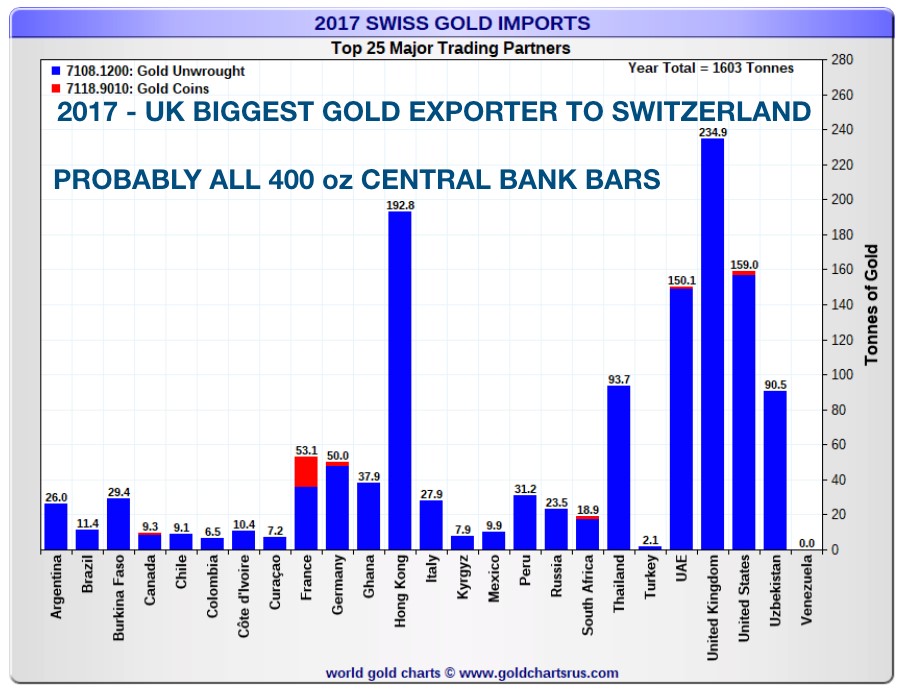 Thus the pattern is clear, gold continues to flow from West to East in big quantities. Countries like China, India, Russia, Thailand and Turkey are unlikely to stop buying gold. All these nations understand the importance of gold and will continue to accumulate most of the gold production in the world.

NEXT PHASE – GOLD BUYING IN WEST AND EAST

As the West accelerates its currency debasement by the massive money printing which will take place in the next 3 to 7 years, gold buying also in the West will grow substantially. So we will have gold demand coming both from the East and the West. Add to that the panic which will follow when paper gold holders ask for delivery from the banks and futures exchanges. We know that there is much less than 1% physical gold available to cover all the paper gold. The demand from East and West combined with panic in the paper gold market, will lead to gold only being available at prices which will be multiples of the current price. Whether that price in today’s money will be $10,000, $50,000 or much more is not worth speculating about. But what is clear is that gold at $1,220 is an absolute bargain.

In my article last week, I discuss how we see Western banks blocking client assets. This is now happening more frequently and this week another person got in touch with us with a similar problem. He has for over four weeks tried to transfer a six figure sum out of a major European bank in order to buy gold. But the bank has until now refused to make the transfer, giving a number of different excuses. The frequency of these cases is clearly accelerating and this is a very strong warning signal that banks will make it increasingly more difficult for clients to take out money or other assets like gold. Please read my article from last week and take the necessary actions to protect your assets before it is too late. I want to stress that every case I mention are cases where we have had direct personal contact with the person who has suffered the injustice.

I sometimes see the odd comment that we are only saying this to attract clients. Let me categorically state that this is absolute nonsense. We set up the system of buying and storing precious metals outside the financial system 17 years ago, in early 2002. At that time we devised the safest system possible for the purpose of protecting our own assets and the assets of our partners. So the system was created for private use. We only opened it to the public in 2006 because of demand from many contacts around the world who wanted to preserve their wealth. Thus we had no intention at the beginning to make it a commercial venture open to outside investors.

But just like Jim Sinclair, we feel passionate about helping other people to preserve wealth before it is too late. My good friend Jim has been preaching this message for many years just like myself. Jim calls it GOTS – Get Out of The System. GOTS goes a lot further than just gold and you can find out about it on Jim’s website.

Most people are not protected and very few own gold. But there are of course families who have been through wars, confiscation of all assets, bank failures and hyperinflation and therefore understand that gold is life insurance. We have many clients whose family has owned gold since well before 1971 when gold was still $35.

There is very little time now to take the necessary protection. As bubble assets start imploding so will debt markets and the system will come under more pressure than it can take.

So please, please, protect yourself and get out of the system while it is still possible!