On January 16, 2013, the Bundesbank - one of the biggest gold holder in the world, with 3,378 tonnes - shocked the world: out of the blue, the German central bank announced that by December 31, 2020, it intends to store half of Germany’s gold reserves in its own vaults in Frankfurt, up from only 31% at the time. The plan would mean repatriating a total of 674 tonnes of gold, 300 from the New York Fed's gold vault, and another 374 from the Bank of France. The transfer, the Bundesbank explained, was meant to "build trust and confidence domestically, and the ability to exchange gold for foreign currencies at gold trading centers abroad within a short space of time."

The "politically correct" motives for the transfer, as well as the logistics and the mechanics behind it were explained in a March 2015 video released by the Bundesbank...

... the real reasons, however, is that following several reports on this website which cast doubts on Germany's gold holdings, in late 2012 the German Court of Auditors demanded that the Bundesbank undertake an audit of its gold reserves. Specifically, the court wanted to ensure that the nearly 3400 tons of gold, of which more than 2,000 tonnes held offshore, is in fact in existence - 'because stocks have never been checked for authenticity and weight'. The move to repatriate was only accelerate following rumors that much of the offshore-held gold might have been "rehypothecated", and not be there anymore, that it might have been melted down, leased, or sold.

Ironically, at the time, Bundesbank Board member Carl-Ludwig Thiele told the Handelsblatt that these moves were a “trust-building” measure, and he tried vigorously to put the rumors about the missing gold to rest. Of course, repatriating your gold from foreign central banks is precisely the opposite of a "demonstration of confidence."

Even more ironic is that speaking to Forbes, a Bundesbank spokesman said in Jan 2013 that “we have no intention to sell gold,” adding that “[the relocation] is in case of a currency crisis." A mildly paradoxical argument since the officially stated reason for the repatriation the gold was to "build trust and confidence domestically, and to have the ability to sell gold quickly If needed."

What made matters worse is that at the end of 2013, the Bundesbank announced it had managed to repatriate only 37 tonnes of the total 700 scheduled for redemption, further spooking the local population and suggesting that conspiracy theories that the gold was missing were in fact accurate.

As a result, following blowback from both the media and the public, the Bundesbank accelerated its activity, and repatriated 120 tonnes in 2014, 210 in 2015, and another 216 in 2016, implying that the Bundesbank's faith in its foreign central bank peers had declined in inverse proportion to the accelerating redemption schedule.

So fast forward to August 23, 2017 when in what appears to have been a very big hurry, and well over three years ahead of schedule, the Bundesbank today announced it had "completed its gold transfer process earlier than originally planned."

The news should not come as a surprise: back in February the Bundesbank announced that it had already concluded the transfer of all the planned gold from New York, leaving only French gold to be repatriated. And, as of today, that too has been completed. From the press release:

"The Bundesbank has completed its gold transfer process earlier than originally planned. After the gold in New York was able to be transferred ahead of schedule in 2016, roughly 91 tonnes of gold still remained in Paris. This was relocated to Frankfurt this year and as a result, there are no longer any German gold reserves in Paris. "This closes out the entire gold storage plan – around three years ahead of the time we were aiming for," reported Carl-Ludwig Thiele, Member of the Bundesbank’s Executive Board, referring to the gold storage plan unveiled in 2013. This plan saw the Bundesbank storing half of Germany’s gold reserves in its own vaults in Frankfurt am Main from 2020 onwards, requiring the phased transfer of approximately 300 tonnes of gold from New York and about 374 tonnes of gold from Paris.

The following table gives an overview of the gold transferred. 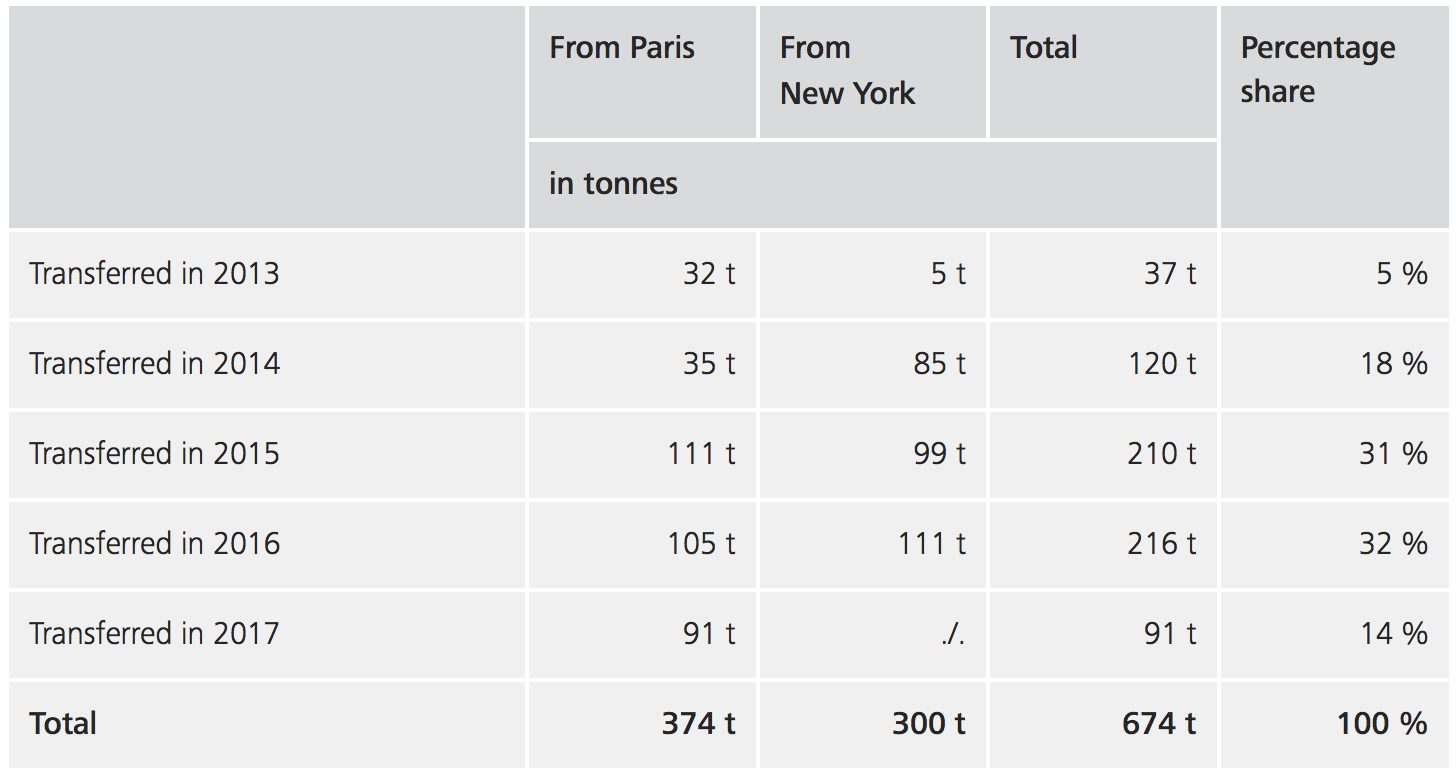 Now that the transfers have been completed, the Bundesbank’s gold reserves are spread as planned across the remaining storage locations.

The Bundesbank had verification measures in place throughout the entire transfer process – from when the gold was removed from the storage locations abroad until it was placed back in storage in Frankfurt am Main – to ensure that it was Germany’s gold reserves that were being transferred. Once they arrived in Frankfurt am Main, all the transferred gold bars were thoroughly and exhaustively inspected and verified by the Bundesbank. When the inspections of transfers had been concluded, no irregularities came to light with regard to the authenticity, fineness or weight of the bars.

In spring 2018, the Bundesbank will publish an updated version of its gold bar list as at 31 December 2017 on its website."

Why this unexpected scramble to repatriate $28 billion in physical gold 3 years ahead of the stated schedule, remains a "mystery."